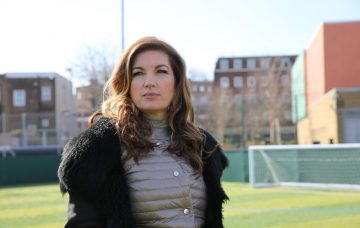 Karren Brady investigated the gender pay gap for a Channel 5 doc Why Do Men Earn More Than Women?

Viewers have blasted a male rights campaigner for claiming female supermarket employees should only be paid the same as men if they work with them “in the warehouse”.

Mike Buchanan, founder of the Justice for Men and Boys Party, also insisted that when women go on maternity leave, male colleagues “take up the slack and never get any damn appreciation”.

The retired businessman, who was speaking on Channel 5’s Why Do Men Earn More Than Women? last night was branded a “caveman who should go back to the Stone Age”.

Mike told host Karren Brady during a fiery encounter: “It’s a false premise that women aren’t getting the same pay as men for the same work. It’s rare.”

Read more: Loose Women stars admit they got a pay rise thanks to Janet Street-Porter!

When The Apprentice star Karren replied that there were sexual discrimination cases being brought against major UK supermarkets, he said: “Those are mainly female in the shops, checking out the crisps and nappies, and it’s mainly men in the warehouse.

“If women want to earn higher wages that come with warehouse work, they should damn well work in the warehouse.

“The idea that they are equivalent to shop-workers’ jobs is a joke.”

Mike said women themselves were to blame for not making it into highly paid jobs.

“Men and women make different choices. Women who take time out to bring up children, given the choice they will take it,” he said.

“And men have to take up the slack and never get any damn appreciation.

“There’s something wrong with women that they have to have all these government initiatives. Companies have to bend over backwards to promote women over men.” 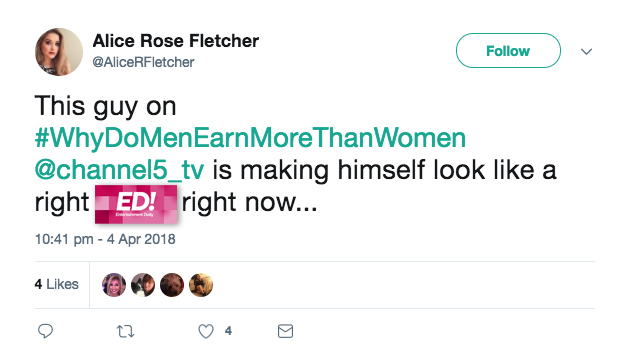 #whydomenearnmorethanwomen omg someone slap that man! So rude! 🤬

Well he was a delight!!! #whydomenearnmorethanwomen

Watching @karren_brady on #whydomenearnmorethanwomen thoroughly depressing knowing the gap is so wide and there is still so much work to do for true #EqualPay it shouldn’t have to be this hard. #GenderPay

Karren Brady is an inspiration to me 🙌🏻 #powerfulwomen #equality #whydomenearnmorethanwomen @channel5_tv

Karren pointed out that firms with women on their executive boards were more profitable.

Mike, who admitted he’d never worked for a firm with a female member as a senior manager, replied: “Even to believe that more women on boards could lead to more profitability, the narcissism in that is just mind-blowing.”

The programme revealed 46 per cent of employers think it’s reasonable to ask a woman during a job interview whether they have children, and 41 per cent think working mums are a burden to the team.

Karren said: “These shocking statistics reveal why motherhood is one of the biggest issues holding back women’s pay.”