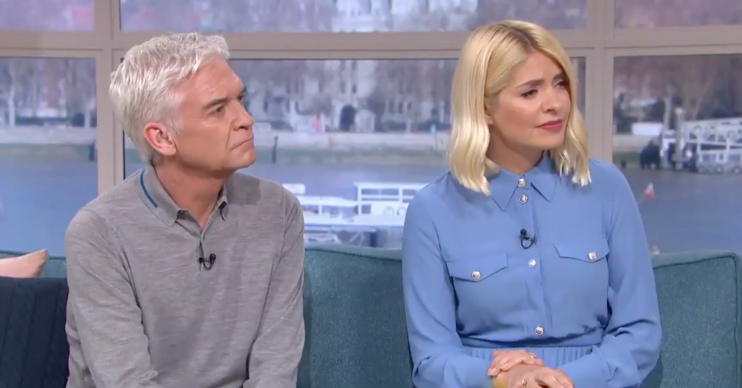 Telly host Holly Willoughby has been singled out by some viewers on social media for being “rude” and “patronising”.

The 38-year-old This Morning star came under fire from haters earlier today who perceived she ‘made it obvious’ she did not agree with thoughts expressed by guest Alena, introduced as a ‘traditional wife’.

In the opinion of some social media commenters, Hols’ reactions throughout the chat indicated she did not agree with Alena’s position.

However, despite the accusations made about Holly, she did not say anything at all that might suggest she did not approve of Alena’s decision to give up her career in marketing, which the guest said “was not her true calling”.

Read more: Holly Willoughby and Bradley Walsh ‘heading back to BBC for full series of Take Off’

Alena explained to Holly and fellow daytime TV host Phillip Schofield – who was not slammed by Twitter critics, unlike his female colleague: “Growing up I was asked several times by teachers what I wanted to be.

“I would always say ‘housewife’ and I would get laughed at all the time.”

If you can afford to, it would be great.

Many observers were quick to praise Alena on Twitter, with several relating her choice to their own experiences.

“Good for her! 30years of my career has given me nothing but misery, redundancy and debt whilst shoving my son into before and after school clubs. In hindsight, I’d much rather had stayed at home because we all have to cook and clean in any case!!” tweeted one viewer.

Another supportive person wrote: “How well did this lady come across on TV? She should have her own segment on the show. Very impressed!”

“What a lovely lady. She made perfect sense. It is her choice,” contributed someone else.

And another person added: “Her life her choice, she’s not trying to tell others how to live theirs, she’s not upsetting anyone and looks happy enough living as she is.”

However, a slightly more wary Twitter user – considering practical and economic realities – cautioned: “If you can afford to, it would be great.”

‘Growing up I was asked several times by teachers what I wanted to be when I was growing up, and I’d always say a housewife’

We meet #TradWife Alena, who’s part of a growing community of women, stepping back in time to be a traditional housewife. pic.twitter.com/2Kb89cp3Xb

Those sharing their interpretations about Holly’s demeanour were not quite as kind with their remarks.

“Holly making it obvious she doesn’t agree – so rude!” claimed one person.

Another person put forward: “@thismorning – patronising interview! Let’s celebrate and applaud the thousands of women who may not be earning but are investing in their home and family and truly adding value #Tradwife.”

And a third person claimed: “Haa, Hollys face when she said she would rather do this than have cash in the bank, shock horror.”