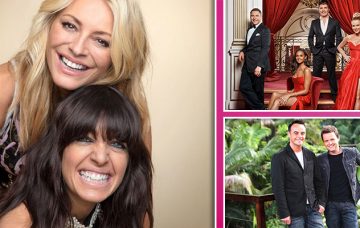 Viewers accuse all these top TV shows of being FIXED

What a suspicious bunch!

Barely a week goes by without headlines screaming that viewers believe a TV show is fixed.

Whether it’s Strictly Come Dancing, The Chase or Britain’s Got Talent, there’s often a conspiracy – be it perceived unfair judging, a suspected stopped clock or imagined editing tricks.

Now, we don’t think for a second that our favourite shows do anything ‘below board’, but according to a new survey of 1000 telly fans, some people definitely smell something a little bit fishy.

The research by PlayOJO suggests that seven in 10 of the Brits questioned by them believe some of the UK’s most loved TV shows are fixed.

Further, the nation’s two biggest talent competitions – The X Factor and Britain’s Got Talent – have been rated by them as the most likely to manipulate the results.

When asked about popular British TV series including Big Brother, Love Island and Dancing on Ice, just 31% of respondents were confident that all of the programmes in question were fair.

The research found that Strictly Come Dancing is seen in a much better light, with just 20% of respondents thinking BBC bosses ‘swing’ the results.

According to the respondents of the survey, the Top 10 shows they feel are fixed are:

A spokesman for PlayOJO, which is an online casino, said: “We are challenging the UK online casino industry by being honest and transparent and we are interested in understanding how fair the UK public thinks other industries and aspects of British society are.

“While we would never question the legitimacy of any of these programmes, it is interesting to see how many people actually think that some of these shows are unfair in some way.”

Dancing On Ice The Apprentice The Chase