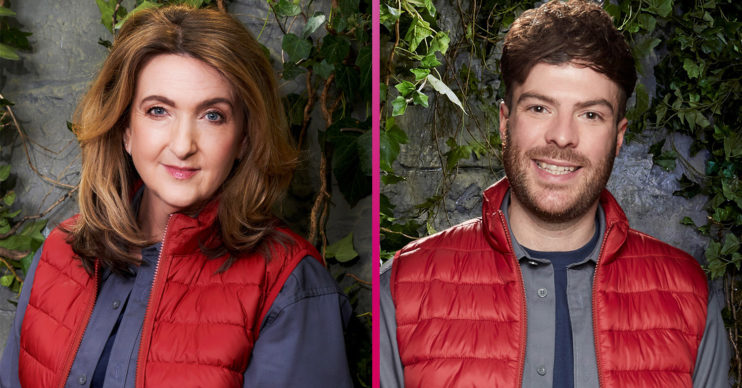 The pair text each other in quarantine

I’m A Celebrity star Victoria Derbyshire has revealed she exchanged messages with Jordan North before they entered the castle.

The pair spent weeks inside the castle in North Wales alongside 10 other celebrities including Vernon Kay, Shane Richie and AJ Pritchard.

However, during their quarantine before the show began, Victoria and Jordan had a conversation on Twitter.

What did Victoria say in the messages to I’m A Celebrity campmate Jordan?

Victoria shared a screenshot of her conversation with Jordan to her Instagram Stories.

Can’t confirm or deny – same for you?

However, Victoria wrote back: “Can’t confirm or deny – same for you?!?!”

Jordan said: “Haha yep,” to which Victoria replied: “I bet we’re even near each other RIGHT NOW!!!!

“It’s gonna be the biggest laugh EVER.”

Victoria captioned the screenshot: “Ha just remembered this – @jordannorth1 and me in quarantine in separate places in Wales skirting around the fact that we were both doing @imacelebrity.”

This year’s series moved from Australia to Wales due to the coronavirus pandemic.

Jordan finished in second place after Giovanna Fletcher beat him to the top spot.

Meanwhile, Victoria became the third celebrity to be voted out.

Mum-of-three Giovanna became Queen of the Castle earlier this month.

Following her win, Giovanna told her Instagram fans how grateful she was for the experience.

She said: “Three weeks ago I walked into a Welsh castle and straight into the arms of 11 wonderful humans for what felt like the most uplifting, hilarious and emotional camping trip of all time.

“Stepping out of your comfort zone can be a scary but amazing thing, and I’m so glad I took on this adventure.”