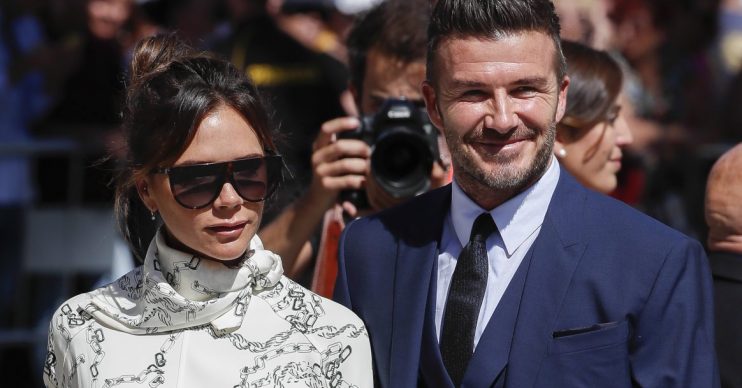 'Very much in proportion'

Victoria Beckham proudly boasted about the size of her husband David‘s privates in a recently resurfaced interview.

In the X-rated chat, from 2008, the former Spice Girl admitted she and the footballing legend still enjoy a “really good sex life” and insisted her man is “very much in proportion”.

Speaking not long after David shot a series of steamy photos in his underwear for Emporio Armani, Victoria called his manhood “huge” and likened it to a “tractor exhaust pipe”.

She said at the time, as reported by OK! magazine: “I’m proud I still have a really good sex life with David. He is very much in proportion.

“He does have a huge one, though, He does. You can see it in the [Emporio Armani] advert. It is all his.

Skip forward almost 12 years to today and the pair appear to be just as loved up as ever.

David and Victoria will have been married for 21 years this July.

And in pictures shared by Victoria on her Instagram page earlier this month, the celebrity couple can be seen cuddling up on the dancefloor at their oldest son Brooklyn’s 21st birthday party.

Posh Spice seemed in high spirits as she posted the photos of the lavish bash with with her 28 million followers, writing in the caption: “Dancing till 6am! Kisses and happy 21st birthday @brooklynbeckham X. I love you so much @davidbeckham.”

In the shots, she looked party-ready in a silky blouse and shiny black trousers.

As for David, he looked as dapper as ever in a sharp suit and his usual stubble. And the England football legend didn’t seem to care that a camera was trained on him as he playfully placed a hand on his wife’s rear.

It was previously reported that the bash would cost a whopping £100k and see a number of famous faces descent on the family’s extensive Cotswolds estate, including Brooklyn’s godfather Elton John, director and close family friend Guy Ritchie and model and actress Cara Delevingne.