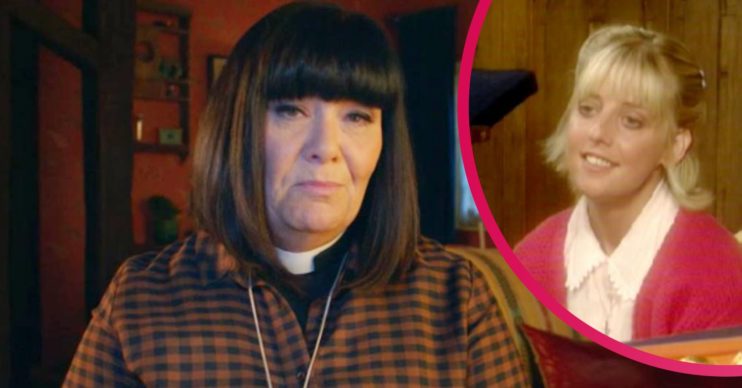 Vicar of Dibley: Tribute to Alice actress Emma Chambers has viewers in tears

The programme is back on screens this month for a series of short lockdown-themed episodes.

What happened with the Alice tribute in The Vicar of Dibley?

In the second episode, vicar Geraldine remembered her friend Alice.

Actress Emma Chambers, who played Alice in the show’s original run, died from a heart attack in February 2018 at the age of 53.

Addressing her parishioners via webcam, Geraldine said: “This is going to be a weird one, it’s about love and laughter and loss.

“Because Dibley is full of such life, but everywhere I go now, every time I’m standing in my kitchen, every time I go into the vestry, it’s always little Alice Tinker I see, and she died three years ago this week.

“Who is the person I’ve most loved in my life? Well I’m very fond of my handsome husband, but in the end, it’s got to be her, my own darling dumb blonde.

“She had one husband, six children and three brain cells, but so much love in her heart she could defrost a frozen pizza on a winter’s day. She wasn’t the brightest bulb in he box, but when we lost her, all our lights went out.

The tribute to Alice Tinker in tonight’s Vicar of Dibley has done me. Beautiful.

She went on to say that the character had gone to hospital and doctors diagnosed her with cancer as her tests came back positive.

Geraldine added: “She was over the moon because she knew that being positive in life is the most important thing.”

While she spoke, pictures of the late actress in character appeared on screen.

How did Vicar of Dibley viewers react to the Emma Chambers tribute?

On Twitter, the tribute had fans in floods of tears.

Another wrote: “Just watched the #vicarofdibley tribute to Alice/Emma Chambers. So lovely.”

A third said, with a crying emoji: “The tribute to Alice Tinker in tonight’s #vicarofdibley has done me. Beautiful.”

A fourth emotional viewer said: “Oh blimey! Just catching up with tonight’s #vicarofdibley and the tribute to Alice Tinker is choking me up. Beautifully played by the wonderful Emma Chambers. Perfect dedication to an amazing character and celebration of friendship, love and togetherness. Pass the Kleenex.”

Just watched the #vicarofdibley tribute to Alice/Emma Chambers. So lovely 🥲

The tribute to Alice Tinker in tonight’s #vicarofdibley has done me. Beautiful 😭