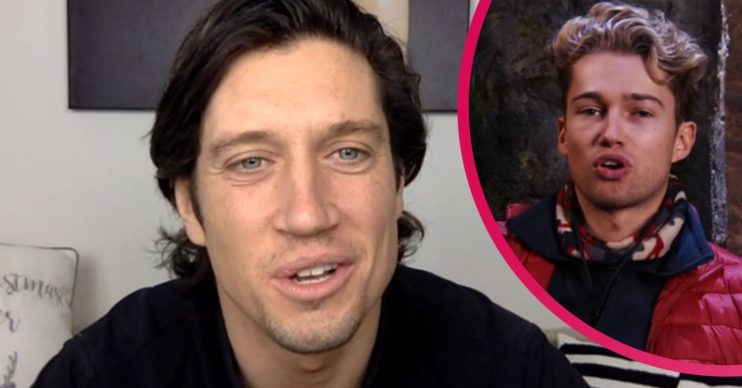 The former Family Fortunes host chatted with Phil and Holly

Vernon Kay was on This Morning today to chat about his time on I’m A Celebrity – and rubbish claims about the camp’s heating setup.

Speaking to hosts Phillip Schofield and Holly Willoughby earlier (Tuesday, December 8), the presenter addressed claims that the camp was nice and warm at times, despite its location in the middle of a derelict castle.

Phil said: “AJ [Pritchard] looks like he’s appeared to allegedly go on record saying you had heaters in there, light heaters, and it was so warm, that’s why he was sleeping with nothing on, because he was so warm.”

What did Vernon Kay say on This Morning?

“Were there heaters in there, Vernon?” Schofe pressed.

Vernon explained: “There was one heater in my living quarters, but [we very rarely used them], I’ll be honestly with you. It was cold at night, it was freezing during the day because of the draft from the door that went into the courtyard, that sometimes remained open, so the draft would come sweeping through.

We were cold at night, but then they did provide us with amazing sleeping bags maybe he was having a hot flush.

“The heat that we got… wasn’t all the time. We were cold at night, but then they did provide us with amazing sleeping bags, maybe [AJ] was having a hot flush.”

AJ was speaking on his podcast with his brother, AJ vs Curtis, when he said the camp was cold in the day, but warm at night.

He said: “So the heat lamps would maybe turn on at about 2am and about 5am, to make it feel warm in the sleeping areas.”

Read more: I’m A Celebrity 2020: Vernon Kay reveals he broke down over ’emotional and physical exhaustion’

Elsewhere in his This Morning conversation, Vernon revealed how the camp shower – which he said had warm water, not hot – became a kind of sanctuary, as it was where the celebs could wash away the grime of the dreaded trials and but it all behind them.

He also spoke about the Cyclone trial and said it was freezing cold.

Vernon revealed that the huge jets of water sprayed at him and Shane Richie, Giovanna Fletcher and Jordan North came from a fire engine.