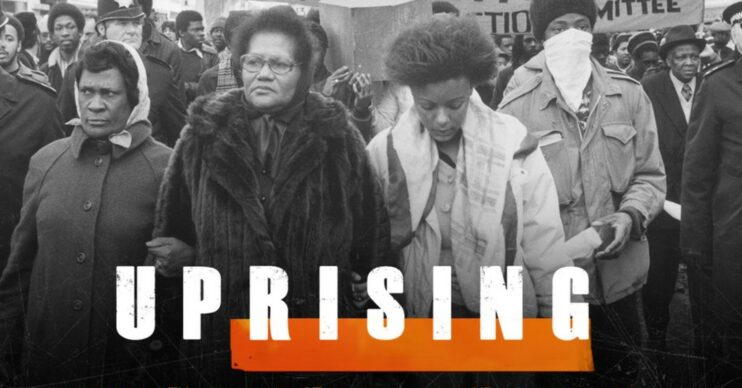 Uprising on BBC One: What is the Steve McQueen documentary about?

The three-part documentary will explore what race relations were like in the UK in the early 1980s.

Through archive footage and testimonies, it will explore how a tragic fire changed the face of Britain forever.

What is Uprising on the BBC about?

Firstly, the New Cross fire in January, that left 13 young black men and women dead. The victims were all aged between just 14 and 22.

Tragically, it happened at a joint birthday party for two teenage girls. At the time, a witness claimed to see a car drive up and throw something at the building.

As a result, heartbreak turned into anger when police failed to arrest anyone over the attack.

The resulting fallout was swift, and it galvanised a powerful race relations movement.

It was claimed the attack was race-related, and many were angry over the nation’s muted response.

Two months later, 20,000 took to the streets for Black People’s Day of Action.

As a result, the famous Brixton riots then followed in April.

The BBC One doc explores how these three events intertwined, and how race relations were defined for a generation.

“The New Cross Fire remains one of the biggest losses of life in a house fire in modern British history,” said James Rogan, Director and Executive Producer.

“What happened and how Britain responded has been waiting to be told in depth for 40 years.”

Read more: Chrissy Teigan replaced on Never Have I Ever series 2

Meanwhile, Steve McQueen said it was “an honour” to be able to make the films.

“We can only learn if we look at things through the eyes of everyone concerned,” he said.

In 2014, Steve garnered international recognition with his film 12 Years a Slave.

Meanwhile, in 2020 he worked with the BBC on the anthology series Small Axe.

Where can I watch Uprising and is there a trailer?

The Beeb recently unveiled the first trailer for the highly-anticipated three-part documentary.

Uprising will air on BBC One at 9pm on Tuesday (July 20).

It will then continue nightly on Wednesday (21 July), and Thursday (July 22).

Are you going to watch Uprising on BBC One? Head to our Facebook page @EntertainmentDailyFix and tell us.