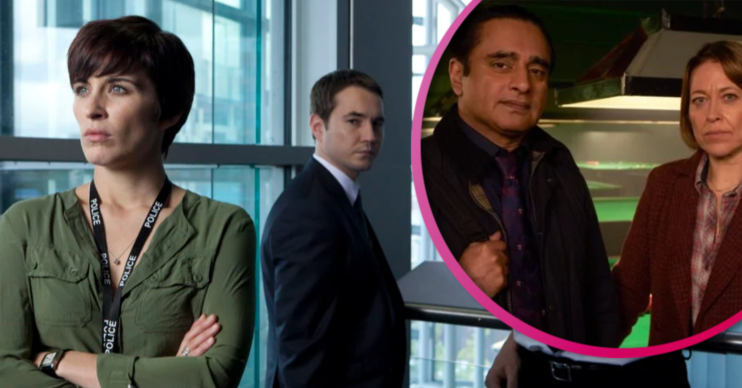 Turns out great TV dramas are like buses: you wait ages for a decent one to come along and suddenly you’re spoilt with two – ITV show Unforgotten and BBC icon Line of Duty are giving us life right now.

Both are class acts that hold their own on the world stage of television, not just on home soil.

But if we had to crown one Best British TV Crime Drama, which show deserves the accolade more?

Read more: What does Ted Hastings’ new catchphrase in Line of Duty mean?

The protagonists in Line of Duty and Unforgotten

Both dramas deserve a pat on the back for taking a chance on their leading actors – while they are all household names now, it’s fair to say neither Adrian Dunbar, Martin Compston and Vicky McClure or Nicola Walker and Sanjeev Bhaskar were obvious show-carrying names when the programmes’ first series aired.

They had all, however, proved their acting talent in other respected productions.

Both shows struck chemistry gold with their leading trio and duo respectively.

Unforgotten inches the win here – as we’ve seen more of Cassie and Sunny’s personal lives, it’s added an extra layer to their relationship and the actors’ performances.

They’ve both killed it – Sheila Hancock, Susan Lynch, Tom Courtenay and Gemma Jones to name but a few have graced Unforgotten, alongside Line of Duty sometime supporting cast Neil Morrissey and Marc Bonnar.

But just look at the guest leads on Line of Duty – Lennie James, Keeley Hawes, Daniel Mays, Stephen Graham, Thandie Newton and now Kelly Macdonald. If the list gets any cooler we’ll need to wrap our TVs in a blanket.

Chris Lang, who pens Unforgotten and Jed Mercurio, Maestro behind Line of Duty, are at the top of their game, giving us other TV gifts such as Dark Heart and Innocent (ITV treats worth looking up if you missed) and Bodyguard and Bodies – if you haven’t seen Bodies, boy do you need to watch – respectively.

For his range – he’s entered the medical, political and police spheres – Jed just pips Chris to the winning post.

The plots of Unforgotten and Line of Duty

On the cop drama spectrum, the two dramas are miles apart. The cold case nature of the stories on Unforgotten allows us to see the lives of the suspects – who think, or are praying on a daily basis, they have got away with murder – gradually unravelling as Cassie and Sunny delve deeper into the crime.

Where to start with Line of Duty? What a tangled web of deceit, violence and interconnecting stories Jed weaves.

Read more: Everything we know about the Unforgotten finale

For the way Mr Mercurio seamlessly pulls details together series apart, Line of Duty gets the gold star.

So there we have it, if we had to pick a winner, Line of Duty would be delivering the acceptance speech.