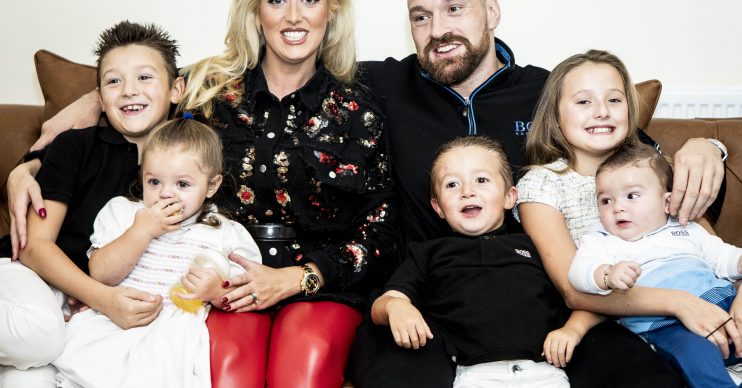 Fans left gutted as the boxer's little girl bursts into tears while watching him fight in the second of three episodes.

Viewers were left reeling as Tyson Fury’s daughter cried when she saw her dad injured during a boxing match last year, as seen on his new ITV documentary.

That little girl has broken my heart.

As Tyson gears up to fight Deontay Wilder this Saturday (February 22, 2020), fans have nothing but love for the Fury family, as cameras follow them through the ups and downs of life with one of the world’s most controversial sportsmen.

But it was seeing Tyson’s daughter Venezuela upset to see her dad’s injured eyebrow that really tugged on the heartstrings in last night’s episode (February 20, 2020).

Clearly a daddy’s girl, nine-year-old Veneuzeula can be seen training with Tyson earlier on in the episode, with the pair filmed running through the streets of their hometown of Morecombe, singing Hotel California together.

The touching scene shows the ‘family man’ side of Fury, who we later see taking on 27-year-old Otto Wallin at a fight in Vegas. As the crowds watch the fight, Paris cheers Tyson on and we even catch a glimpse of new member of the clan, Molly-Mae, who met Tyson’s brother Tommy on Summer Love Island 2019.

In the documentary, all eyes soon turned to his little girl. She wakes up in the middle of the night with her baby brother and their grandmother to go downstairs and watch Tyson’s big fight together.

But when Wallin chips him above the eye it started pouring with blood, much to Venezuala’s horror, who couldn’t help but burst into tears at the sight of someone hurting her dad.

Watching TysonFury: The Gypsy King on @ITV and I feel sad for the kids crying whilst watching their dad with that gash 😞 #Boxing #TysonFury

That little girl has broken my heart #TysonFury

It’s not the only time our hearts were warmed further towards the Furys in last night’s episode.

In between the day-to-day quibbles between Paris and her childhood sweetheart, we see moments of pure love between the couple, who met when Paris was only 15.

The down-to-earth couple are seen disagreeing over the future of their kids’ educations, with Paris wanting them to finish school at 11 and lead a traditional traveller life. Tyson however has different ideas, and wants his kids to have an education.

He said: “I hate dream killers.”

Paris again touches on Tyson’s struggles with mental health, which we were introduced to in the first episode last week. Never one to take anyhting to seriously, the now much-loved wife and mother compares living with Tyson to ‘living with droopy and a smurf’.

People are loving the family more with each episode:

Falling a little bit in love with Tyson Fury and his family. What lovely people ❤️

Thoroughly enjoying Tyson Fury: The Gypsy King. And got even more love for Paris Fury.

@Tyson_Fury watching you and your family on ITV, you sir are a #Gentleman. Your love for your family is second to none and your passion for boxing is electric- one word ‘inspirational’ thanks for sharing your 🌎

And is if we weren’t decided on whether we’re now full Tyson Fury converts, he went and melted everyone’s heart by paying €200 (£167) to rescue some lobsters from a restaurant, throwing them in to the sea with a waiter.

The final episode of Tyson Fury: The Gypsy King will be shown on ITV at 9pm on February 27.

Have you fallen in love with the Furys? Leave us a comment on our Facebook page @EntertainmentDailyFix and let us know what you think.