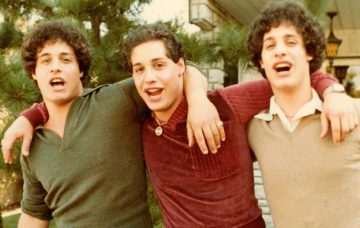 The siblings were part of an unethical experiment in the 60s

Channel 4 viewers were left “freaked out” and “disturbed” by the tragic story of identical triplets who were separated at birth.

BAFTA-nominated documentary, Three Identical Strangers, charted the incredible story of brothers who lived until the age of 19 never knowing each other existed.

In a bizarre twist of fate, the young men discovered they were a set of three purely by chance, when one brother was told on his first day of university that he was the spitting image of another student…

However, behind the joyous reconciliation, there was a dark secret – the three had been separated deliberately as part of a ‘nurture versus nature’ experiment.

The moving documentary, which aired on Channel 4 last night (Thursday 28 February), astonished viewers as the two remaining brothers – now 52 – described everything that had happened to them.

Robert Shafran, Edward Galland and David Kellman – aka Bobby, Eddy and David – were born in 1961 and, six months later, adopted by three different sets of parents within a 100-mile radius of each other in New York State.

Unbeknownst to them, they were part of a study to track the development of genetically identical siblings raised in differing circumstances.

The three infants were intentionally placed with totally different families, with different class and wealth, but crucially never told about the others.

As the sad story unfolded, the brothers revealed they subsequently struggled with mental health issues for years.

Devastatingly, Edward Galland took his own life in 1995.

Fans were moved and “amazed” by the documentary, with one calling it: “Simultaneously fascinating and heart wrenching.”

Went from amazed to angry to sad watching that! #ThreeIdenticalStrangers

Try and watch #ThreeIdenticalStrangers tonight on channel 4 at 9. It truly is a wonderful, enthralling and also disturbing film. #longlostfamily – an utterly astonishing story.

This has been harrowing. Getting to sleep will take a while #ThreeIdenticalStrangers

Another said they had gone from “amazed to angry to sad” watching it, while one more said: “As a twin, Three Identical Strangers Freaked. Me. Out.”

Others called it “harrowing”, “sinister” and “mind-blowing”.

Would you rather watch a soap or a real life documentary? Leave us a comment on our Facebook page @EntertainmentDailyFix and let us know what you think!