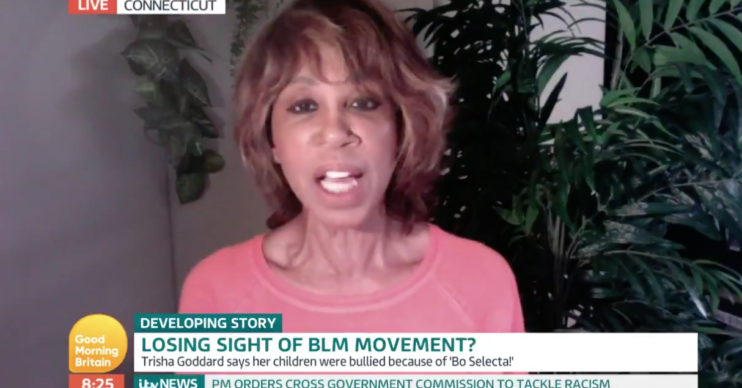 The comedian has apologised to Trisha and her family privately

Presenter Trisha Goddard has been subjected to “even more abuse” following Leigh Francis’ apology over his depiction of her on Bo’ Selecta.

Last month, the comedian issued a heartfelt apology for impersonating black celebrities, including Trisha, Mel B and Craig David on the Channel 4 show.

'Since Leigh made that apology I have been subject to even more vile abuse.'@TrishaGoddard reveals she's suffered even more abuse since Leigh Francis made a public apology for his portrayal of her in 'Bo Selecta!'@susannareid100 | @piersmorgan | #GMB pic.twitter.com/VQrd5QAVfo

However, Trisha, 62, has since revealed Leigh’s video has resulted in a swarm of online abuse against her.

Speaking to Piers Morgan and Susanna Reid on Good Morning Britain today, she said: “I don’t mind people joking about me, but it was the big lips, the big nose of the character, and a lot of people said ‘why didn’t you say anything then’, assuming I didn’t.

“The other thing is people are saying ‘lighten up it’s a joke’. But if he portrayed Vanessa Feltz, a proud Jewish presenter, with a big nose, or Gok Wan working in a Chinese takeaway, they are all abhorrent, and I didn’t realise until very recently how badly bullied my children were.

“Since Leigh made that apology I have been subjected to even more abuse.”

The former Dancing On Ice star continued: “[People saying] You’ve ruined his career just because you can’t take a joke, and there have been threats.”

She added: “It’s not just down to Leigh, someone commissioned it, the whole thing. I don’t want it to be about Leigh, it’s about systemic racism.”

Leigh – who is best known for playing Keith Lemon on Celebrity Juice – reached out to Trisha and her family ahead of his public apology.

Speaking about the bullying her daughter received over the show, Trisha added: “Leigh sweetly talked to my daughter Billie for a very long time about his experience.

“He was horrified what she went through, he said as a father he feels so bad about this.”

Following recent events, I’ve done a lot of talking and learning and I would like to put this out there. I want to apologise to anyone that was offended by Bo’selecta. I’m on a constant journey of knowledge and just wanted to say I’m deeply sorry. #blacklivesmatter

Last month, the comedian addressed his followers in a tearful video on his Instagram page.

Speaking from his home, he said: “Hi, My name is Leigh Francis and I play a character called Keith Lemon on television.

“Back in 2002 I did a show called Bo Selecta and I portrayed many black people. Back then I didn’t think anything about it.”

Taking responsibility for his actions

He went on: “People didn’t say anything… I’m not going to blame other people.