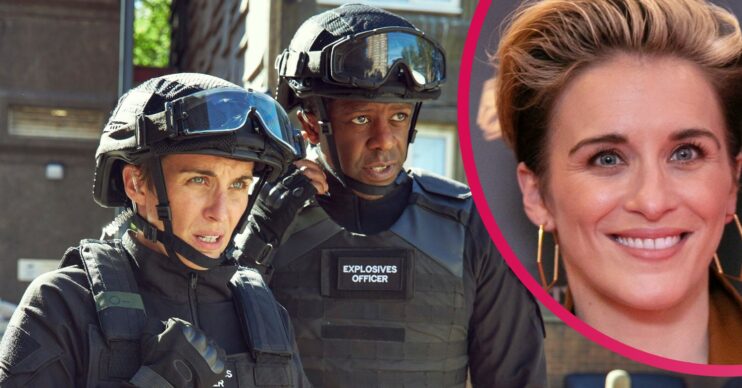 The new drama will air next year

Fans of Vicky McClure have declared that they ‘can’t wait’ after the star released a trailer for her new ITV show, Trigger Point, on her Twitter last night.

The one-minute-long trailer for the new ITV drama had fans in a frenzy when Vicky posted it online on Sunday (21 November) night.

What is Vicky McClure’s new ITV show Trigger Point about?

The drama has been created by Jed Mercurio. As well as Trigger Point, Jed also created the immensely popular Line of Duty, which also stars Vicky.

Trigger Point promises to give viewers an insight into counter-terrorism policing and is about the officers who risk their lives daily to prevent danger befalling us.

What happens in the Trigger Point trailer?

Vicky McClure posted the Trigger Point trailer on her Twitter with the caption: “Anyone catch it?!? Here’s ya first look at #TriggerPoint #countdownison.”

The trailer is a thrilling glimpse at the new series. It features clips of high stake action, including Vicky McClure in the aftermath of an explosion, armed police storming a building, and Vicky looking for explosives.

Other clips seen include Adrian Lester shouting at Vicky not to flick a switch, armed police running from an explosion, and Vicky McClure trying to calm a victim down.

Though the trailer is very brief, there’s enough in it to tell audiences that they’re in for a thrilling ride when the show airs next year.

What did fans online have to say?

Fans were in a frenzy after Vicky released the trailer, and were quick to tell the 38-year-old how excited they were.

“Absolutely can not wait,” one fan raved.

“Looks amazing. Can’t wait for this!” another said.

“This looks utterly amazing, devastating, and incredible. Can. Not. Wait.” a third fan wrote of the Trigger Point trailer.

“I can already tell this is going to end up with me half holding my breath through each scene like Bodyguard did,” another tweeted.

Trigger Point, starring Vicky McClure, will air on ITV at some point in 2022.

What did you make of the Trigger Point trailer? Leave us a comment on our Facebook page @EntertainmentDailyFix and let us know.