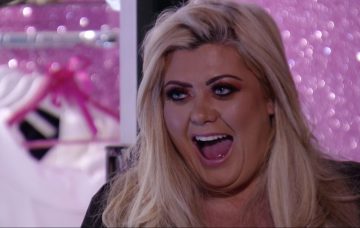 It was a romantic Easter on The Only Way Is Essex as the will they/won’t they couple of the decade finally decided they ARE girlfriend and boyfriend.

Gemma Collins and James ‘Arg’ Argent have been – in Arg’s words – bouncing off each other for five years, never quite managing to make things stick.

But that all changed in the most recent episode as Arg became a man on a mission – and that mission was to make Gemma his girlfriend.

He wasn’t about to go about it lightly – talking to the pair’s friends about how best to woo his Gemma, and even going so far to talk to her mum, Joan, to make sure he had her blessing.

“Me and Gemma, we’ve been dating, seeing each other on and off,” he told Joan. “Recently, the last few months especially, it’s kind of hit me how lucky I am to have her in my life and how special she is to me.

“I’ve come to the conclusion that I’m in love with your daughter. And there is a big question that I need to ask Gemma, but I won’t do it without your blessing.

“I want Gemma to be my girlfriend, like properly.”

Joan, saying all she wanted was Gemma’s happiness, insisted Arg had her full blessing, provided he planned on treating her daughter well – taking the time to remind him that that meant more than just emotional support, but helping around the house as well.

With Joan’s blessing, Arg was finally ready to see if Gemma was as keen to make this official as he was – with an added bit of flair.

While she was closing up her boutique clothing shop, Arg surprised her with a Mariachi band, before stepping forwards himself, wearing a sombrero.

“And something’s changed in me recently where I feel a complete different way about you that – I’ve never felt this way before.

“So basically what I wanna say is, I just wanna know if you’ll be my girlfriend.”

“Of course I will,” Gemma responded, beaming.

TOWIE fans were quick to support the couple, taking to twitter to express their delight.

Arg recently opened up about their romance, saying: “I think me and Gemma is the greatest TOWIE love story, because of the ups and downs.”

We’re sure many fans will agree – but let’s hope it’s all just up from here and no more downs!

Are you happy Arg and Gemma have made it official? Leave us a comment on our Facebook page @EntertainmentDailyFix and let us know what you think!

Gemma Collins James Argent The Only Way is Essex Towie