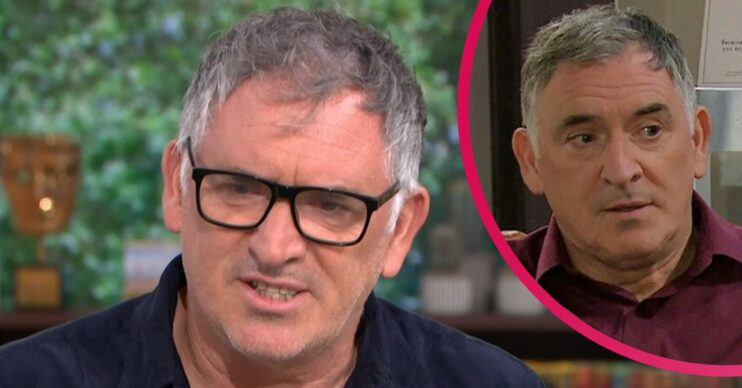 Ruth was just 43 when she passed away from pancreatic cancer, having been diagnosed two years earlier.

Tony has opened up about his sad loss before and is now campaigning for early diagnosis by taking part in a charity bike ride.

Appearing on This Morning on Thursday May 19, Tony revealed his plans to raise vital funds for pancreatic cancer research by cycling 100 miles around London.

Host Holly Willoughby asked about his late wife and Tony told her: “She was great, she was good fun, she was easy-going.”

He went on to add she fancied Philip Schofield!

Tony also revealed she was so fit it hid her symptoms.

“She was a really fit person, she ran, she cycled and it was part of that that masked the symptoms in that her urine was very dark and it could have been dehydration.”

He said the doctors thought she had a urinary infection, but she then started to turn yellow. She had been concerned it was pancreatic cancer.

“With pancreatic cancer, over half the people die within three months of diagnosis. It’s been the case since the 70s it’s really been left behind regarding funding.”

Speaking of the moment they found out, he said: “It was pretty grim. I was an optimist expecting it to be a benign tumour.

“But the doctor said in no uncertain terms: ‘it’s cancer’.”

They were told the cancer couldn’t be operated on, but she got a second opinion and eventually travelled to Germany for surgery.

Tragically, Ruth had the operation and the tumour was removed, but the cancer had already spread.

“Part of the thing when you have surgery is you can’t have chemotherapy for a little while because it kills the good cells as well as the bad cells,” Tony revealed.

“So while it was all clinging together, some cells had got loose and it was quite devastating because it was probably two months after the operation, we found out it had spread already.”

The couple decided to live life “like they were retired” and embrace the time they had left together.

Ruth carried on cycling and now Tony is undertaking a bike riding challenge in her honour.

Dr Semiya appeared alongside Tony and told how spotting the symptoms early was absolutely key to prolonging the life of sufferers.

Tony said: “What the charity are working on is an early diagnostic test and they need more money for research.

“If you can catch it early and it’s at the head of the pancreas, it won’t wrap itself around and then they can operate.

“It’s about seeing it early, getting the op and then moving on.”

What has Tony Audenshaw said about wife Ruth’s illness previously?

Tony has spoken about her death in the past and called her illness “unfair”.

Tony and Ruth were married for 24 years and had two children together – George and Em.

Ruth battled pancreatic cancer for 16 months before passing away.

Read more: Emmerdale: How many times has Bob been married? All his wives and children listed

Tony recalled the heartbreaking moment she was told during a hospital visit she had only months to live.

He told The Mirror in 2017: “I remember being very quiet as we walked to the hospital car park, then breaking down in the car. Before we worried about forgetting to put the bin out. Now Ruth was going to be dead within a year after a horrible illness.”

Tony added Ruth’s condition seemed especially cruel as she, a cognitive behaviour therapist for the NHS, had always been health conscious.

He reflected: “Her death seems all the more unfair as she did not smoke, and kept fit by running.”

The couple even met during an aerobics class in 1993.

But after Ruth with diagnosed with stage three adenocarcinoma, they had to break the awful news to their children.

“We spent loads of time together and that made us even closer as a family,” Tony added.

Over a year later, in January 2019, the ITV soap star spoke about how his lives with his grief.

Tony said during an appearance on Loose Women: “I really miss Ruth.

Grief is not linear.

“Grief is not linear. It goes up and down.

He added, recounting the hard conversation he and Ruth had to have with their children: “I think talking about things is really important.

“And talking about things after Ruth was gone, and having things written down to remember what her wishes were helps.”