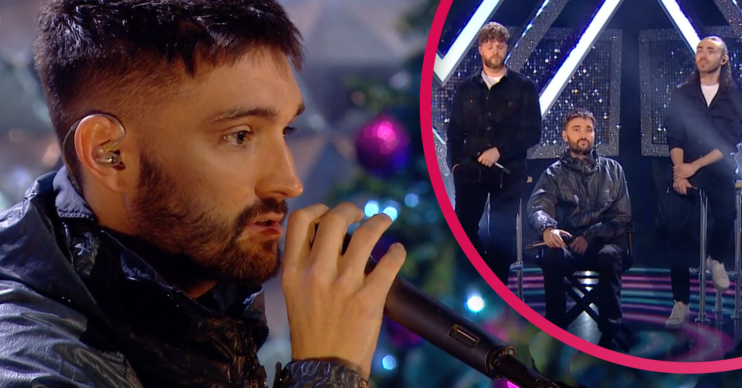 He and his band sang Stay Another Day

Tom Parker appeared on It Takes Two with his The Wanted bandmates last night (December 15) and there wasn’t a dry eye in the house.

The singer, who is battling a rare form of cancer, appeared on the Strictly Come Dancing spin-off to perform his new song.

Tom and his bandmates have recorded a cover of the East 17 Christmas classic Stay Another Day.

What did viewers say about Tom Parker and The Wanted on It Takes Two?

It seems like there wasn’t a dry eye in the house as Tom and the boys belted out the festive tune.

“Not me almost crying over The Wanted singing Stay Another Day,” one fan tweeted.

Read more: When was Tom Parker diagnosed with a brain tumour and what’s his prognosis?

Another added: “Absolutely beautiful performance of Stay Another Day on #ittakestwo always loved that song, very emotional but lovely. You boys singing it makes it all the more special.”

A third said: “Well just watched @thewanted on #Strictly #ItTakesTwo and I cried my eyes out hearing them sing Stay Another Day. My fave boys killed it today, so proud.”

A fourth fan even said the boys did a “better” version than the original.

“Aww, The Wanted sound great on #ittakestwo. Dare I say better than E17?” they said.

How is Tom Parker doing now?

Earlier this month, Tom issued an update on his cancer battle.

Speaking on Loose Women, Tom revealed that he is “stable”.

“Stable, yeah! It’s pretty unheard of at this point. Really over the moon and very grateful,” he said.

Tom added: “I’m a big believer in what you put out into the universe is what you get back.

“It was either get up and get on or sink and die.”

Head to our Facebook page @EntertainmentDailyFix and tell us what you thought of the performance.