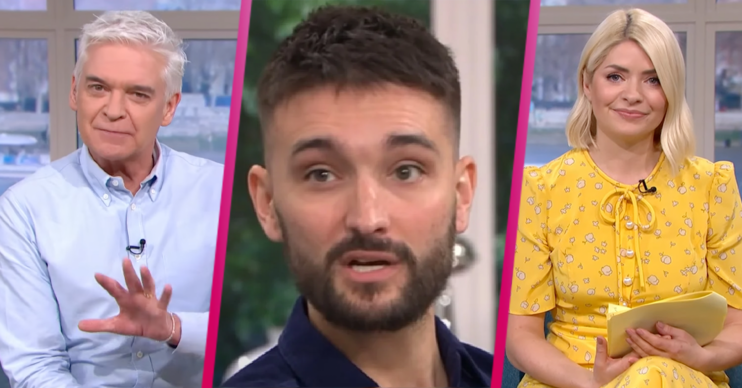 He wasn't mentioned at the top of the show

This Morning viewers expecting Tom Parker‘s death to be mentioned at the top of the show today were left disappointed with what they saw as a “snub” to The Wanted star.

Tom’s death at the age of 33 was announced by his wife Kelsey yesterday (March 30).

And, tuning into This Morning today (March 31), fans of the singer expected hosts Holly Willoughby and Phillip Schofield to pay tribute to Tom early on.

However, after an hour of the show passed with no mention of the singer, disgruntled fans took to Twitter to issue a plea.

What did This Morning fans say about Tom Parker’s death?

They appeared to think that a tribute to the singer should’ve run right at the start of the show.

Taking to Twitter, one said: “No mention of Tom Parker?”

Others were a little more upset in their tweets.

“Why the hell has Tom Parker not been mentioned please??? You actually had him on your show, and his poor wife, but not a single thing said so far,” said one.

They added: “Disrespectful! It should have been at the very start, instead they were talking about casting roles for William and Harry for the next series of The Crown.

“How about a wee tribute to Tom Parker?” asked another.

What did Holly and Phil say about Tom?

Later in the show, speaking to Vanessa Feltz about the day’s news items, Holly and Phil did share a tribute to Tom.

Holly said that the news was “so sad”, while Phil commented that Tom’s death was “utterly heartbreaking”.

Vanessa then said: “It’s just the saddest of all stories, and just the deepest condolences to his family, and his friends, and his fans, and really I would say, people all over the world who came to have the absolute maximum respect for him.”

“Because he was so young, so brave, so positive wasn’t he?

“And he said this was all about living, this was not about focusing on the illness, but about how he could maximise every single moment of every single day,” Vanessa added.

How did This Morning fans react to the tribute?

One called the decision to leave Tom’s death till so late in the show “very strange”.

They added: “But at least they’ve spoken about him now.”