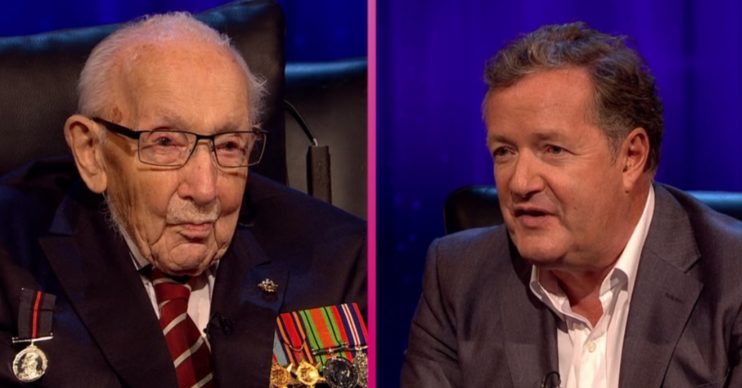 Sir Tom Moore insisted he would “hate” to have to live in a nursing home during his chat with Piers Morgan.

Speaking on Life Stories last night (Sunday, September 13), the fundraising legend opened up about his wish to retain as much of his independence as he can for as long as possible.

Sir Tom said on the ITV programme he would not “want to finish up in an old people’s home” with carers having to feed him, following an accident.

He told Piers: “I did not want to finish up in an old people’s home without any facility of my own, having to be fed in every way.

Sir Tom, who raised millions for NHS charities by doing laps of his garden to mark his 100th birthday, had been explaining to the Good Morning Britain presenter that he once told doctors not to resuscitate him – should his condition deteriorate – after a nasty fall.

He said on Piers Morgan’s Life Stories: “I have always felt that if somebody is gravely ill and near to death, to bring them back for them to die a very unpleasant death… why do that?

I did not want to finish up in an old people’s home without any facility of my own.

Elsewhere in the episode, Tom revealed that he was caught speeding at the age of 98.

Speaking on the programme, he said he drove too fast and had to take a speed awareness course. Sir Tom described as “boring”.

He told Piers: “That was not fair. I mean, 38mph for somebody like me. It was nothing. I went on one of these speed awareness courses.”

The star also received messages of praise from famous faces who find him inspiring. Among them were boxer Anthony Joshua, Olympian Mo Farah and Dame Joan Collins.

In her video message, the latter suggested they should meet up to “break bread” or have a few cocktails together.

What did you think of Sir Tom Moore’s episode of Piers Morgan’s Life Stories? Leave us a comment on our Facebook page @EntertainmentDailyFix and let us know.