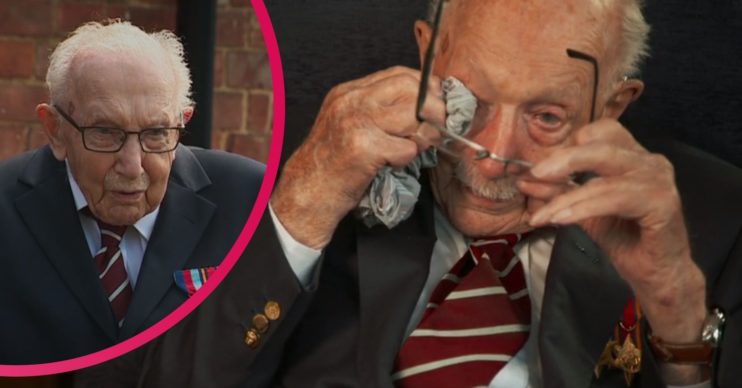 Tom Moore fought back tears last night as he opened up about his dad in the new documentary about the fundraising hero’s life.

Sir Tom Moore said his father would be “absolutely delighted” with his achievements during the coronavirus pandemic, as he was asked about his parents in the ITV programme.

What happened in the Captain Sir Tom Moore documentary?

“And my father, he would have been delighted. And if he’s still up there, hearing it, he will be absolutely delighted.

“Of all the people in the family would be pleased, that would be my father.”

As he spoke, Tom’s voice welled with emotion and he wiped away a tear.

On Twitter, those watching at home cried along with him as they hailed him as an “amazing human being”.

What an amazingly lovely man.

Another tweeted: “Oh @captaintommoore, every time I see your face, I have tears rolling down mine. Wonderful life story on @ITV #CaptainSirTom.”

A third wrote: “What an amazingly lovely man, his documentary was brilliant.”

Someone else said: “He is an amazing human being, there are no words to top what this man has done for the NHS! Thank you, Captain Sir Tom Moore. Well done @ITV, I had tears in my eyes watching it.”

A fifth said: People of today could learn a lot from this remarkable man. He’s got so much love, care and compassion for others.”

What an amazingly lovely man his documentary was brilliant

He is amazing human being there is no words to Top what this man has done for the NHS ! Thank you Captain Sir Tom Moore 👍 well done @ITV I had tears in my eyes watching it

Sir Tom received his knighthood last month from the Queen, in the monarch’s first public engagement since March.

During the ceremony, held at Windsor Castle, Her Majesty spoke a few words to the hero – who raised millions of pounds for NHS charities by walking up and down his garden to mark his 100th birthday.

Afterwards, Sir Tom revealed what the Queen said to him.

Appearing on Good Morning Britain via video link alongside his family, he said: “I’ve never ever had such a time in all my life as to be there speaking to the Queen, who’s such a delightful person.

“She was absolutely marvellous. When she tapped me on the shoulder with her sword, which had been her father’s, she did it so gently. She was the kindest person you could ever wish to meet.”

He continued: “She looked round at all of us as a family and said, ‘You’ve done so well’. It was an absolute pleasure and honour.”