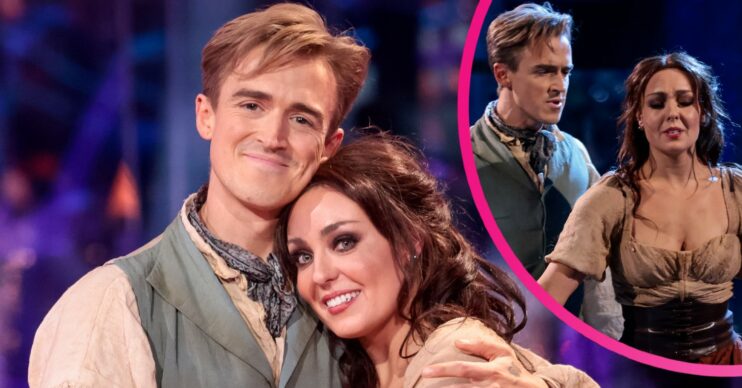 Tom and partner Amy made it to Musicals Week

Tom Fletcher has broken his silence following his exit from Strictly Come Dancing.

After facing the dance-off with Rhys Stephenson, Tom took to social media to thanks fans for their support.

The star was seen cracking jokes with Amy as they practised together.

In the caption, Tom penned: “Well, today is a strange day. Instead of heading to the training room to learn a new dance with @amy_dowden, I’m sitting at home opening all the post I’ve been avoiding for 11 weeks.

“Of course absolutely gutted to have been voted off @bbcstrictly but the competition is so high this year that I’m amazed and proud that I got as far as I did!

“Going out on Musicals Week with a dance that genuinely meant something to me was actually really special.”

In addition, he said: “The truth is though, that as much as I’ll miss the excitement of the live show on a Saturday night, the thing I’ll miss the most is simply hanging out with Amy every day.

“We have had so much fun and after 11 weeks of dancing with her every day it feels very strange to be sitting in a quiet, empty house today!

“But I know that the only reason it’s sad and a little difficult today is because I’ve had such a good time and I’m really thankful for that.”

Tom concluded the post by thanking the Strictly team for pairing him with Amy.

“For now though, this is what I’ll miss the most, hearing @amy_dowden’s absolutely ridiculous laugh every day,” Tom added.

“I’ll see you tonight for It Takes Two, Amy. There might be tears.”

How did Strictly fans respond?

One fan wrote: “Absolutely gutted for you both, IMO totally robbed… strongly disagree with the judges. But thank you for your entertainment over the weeks. Your partnership was/is incredible.”

A second said: “You were absolutely robbed in that dance off.”

A third posted: “I really enjoyed watching you and Amy dance. You didn’t deserve to be voted off.”

Tom’s wife Giovanna shared: “We’re so flipping proud of you!!”

Many Strictly viewers were outraged over last night’s decision, with some claiming that Dan Walker deserved to go.