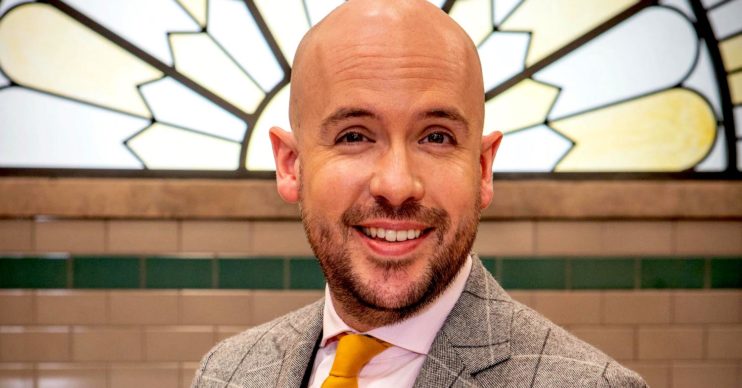 Who is Tom Allen? Bake Off: The Professionals host’s little known Doctor Who role revealed

Tom Allen returns to host Bake Off: The Professionals tonight (May 26).

He’ll be teaming up with pal and former Bake Off contestant Liam Charles to present the series.

But who is Tom Allen and where have you seen him before?

Well, it turns out the comedian has a pretty impressive career.

Who is Tom Allen?

Tom Allen is a 36-year-old comedian from south east London.

He got his big break in 2005 after winning the UK comedy newcomer award So You Think You’re Funny.

In a double win, just a few months later he received the BBC New Comedy Award.

That same year, he worked with John Malkovich on his comedy blockbuster Colour Me Kubrick.

A year later, he collaborated with Jame McAvoy on the British film Starter for Ten.

Then, in 2010, Tom featured alongside Mark Gatiss on the romantic comedy flick Tamara Drewe.

A little known fact about the comedian is that he also starred in Doctor Who as Oliver Harper – the travelling companion of the First Doctor.

However, this was for an audio book series as opposed to the TV show.

What else has Tom Allen been in?

He was also Sarah Millican’s support act during her sold-out tour of Australia New Zealand and the UK in 2016.

During that same year, he fronted a sell-out run of his own show at the Edinburgh festival.

In 2017, he announced his first ever solo tour around the UK which was such a success, it was extended to 2018.

Tom has appeared on countless TV shows over the years as well.

Mock the Week, 8 Out of 10 Cats, Celebrity The Crystal Maze and Channel 4’s Comedy Gala are just some of his credits.

Who is Tom Allen dating?

Tom Allen is currently single and lives at home with his parents.

During an interview with i News last year, he revealed he is has never been in a proper relationship before.

He said: “There are people who find it very easy to get into relationships and I’ve always just not.

“So I suppose it lends itself to quite a solitary life.”

Tom is openly gay and discusses his sexuality in his stand-up shows.

“I guess I talk about it because it’s part of my identity,” he explained. ”

“And since I was made to feel ashamed about it for most of my life (I’m still not over that now) and I get messages (every five to ten minutes) saying that it’s actually helped them by me being upfront about it I might just keep going.”

He  continued: “In a world where people are questioning whether children should be taught in schools that gay people even exist… I wonder if it might be more important than ever for us all to talk positively about who we truly are.”