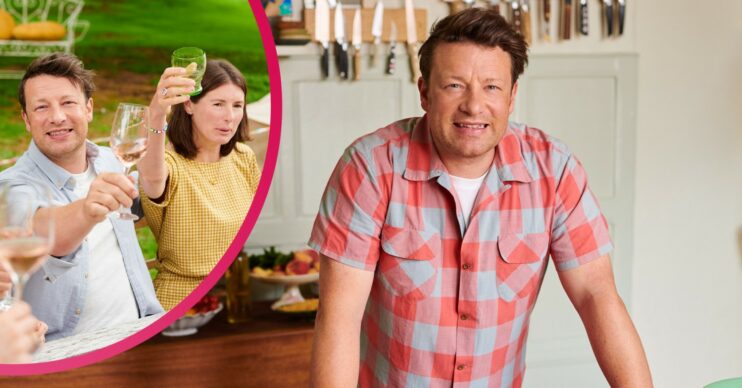 Together on C4: Jamie Oliver burnt his private parts on a romantic date with wife Jools Oliver

Was meat and two veg on the menu?

Together chef Jamie Oliver has revealed that he once cooked for his wife Jools totally starkers.

But instead of being the aphrodisiac he hoped it would be, the incident left him red faced.

Or rather red somewhere else (a bit lower down)…

Together on C4: Jamie Oliver and Jools’ romance

Talking to Australian radio hosts Will & Woody on KIIS 106.5, Jamie described the “painful” moment he burnt his manhood.

Living up to his moniker The Naked Chef, the TV star revealed he was cooking in the nude for his wife Jools when the unfortunate accident happened.

In a bid to impress Jools, Jamie decided to whip up a romantic meal after whipping out his appendage.

He said: “I did a whole roasted sea bass, and I thought the coolest thing to do as The Naked Chef, would be to serve it naked.

“The only thing I was wearing was a bow on the end of it.

“A red bow, to be specific…

“I tied it, and it was a double knot. I opened the oven, and checked the seabass halfway through…

“And what I imagine was a perfect laser shot of steam attacked my penis.”

The Together presenter went on to explain that it was “the worst pain of the world yet what happened was one of the most beautiful things I ever saw [because it swelled up]”.

He explained that he was forced to spend the evening with a packet of frozen peas on his meat and two veg.

Jamie Oliver warned listeners that he “did it once. But you shouldn’t EVER cook naked”.

The now-married chef said: “I was obviously very distressed, and she thought I was stupid and ridiculous.

“But ultimately, it’s all about caring and I had tried, had made the effort.”

Together on C4: How long have Jamie and Jools been together?

How many children do they have?

Luckily for Jamie, the scolded private parts were still fit for purpose and he has five children with his wife Jools.

Tragically, Jools has suffered five miscarriages in total – three after welcoming River in 2016.

How old is Together chef Jamie Oliver?

He is currently 46 years old, the same age as wife Jools.

Jamie Oliver: Together on C4

The chef launches his new TV series on C4, which – of course – is accompanied by a brand-new cookery book.

Jamie prepares meals for social events, beginning with a rolled shoulder of lamb with fennel, sage and sausage stuffing, with a herby sauce.

It just had to be a sausage, didn’t it?

Jamie Oliver: Together starts on Monday September 13 2021 at 8pm on Channel 4.

Would you cook a meal in the nude? Leave us a comment on our Facebook page @EntertainmentDailyFix.