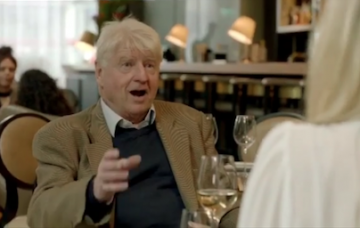 Unlikely jungle pals Georgia Toffolo and Stanley Johnson will swap munching on creatures’ genitals for cucumber sandwiches with the crusts cut off as they reunite for scenes in Made In Chelsea.

Despite the 50-year age gap, the recent I’m A Celebrity contestants have maintained their bond since returning from Oz, with Toff turning up to a Conservative Party ball in February alongside Boris’ dad.

But now Stanley is stepping into her reality show world – and fans are very OMG about the 77-year-old potentially hanging out and yah-yahing with Jamie Laing, Louise Thompson and Alex Mytton.

Omg Toff really got Stanley Johnson to go on Made in Chelsea?😱 I love their friendship😄

Did I really just see Stanley on the made in Chelsea advert, omg like I wasn’t excited already 😭😍

STANLEY JOHNSON IS ON MADE IN CHELSEA OH MY GOD

OMG I’m so excited that stanley johnson is on made in chelsea with @ToffTalks 😭they’re so cute!❤

Oh my Stanley Johnson is going to be on Made In Chelsea, might have to start watching again

The pair share a scene where they enjoy afternoon tea together – and were spotted arriving for filming last month at Piccadilly Circus in London’s West End.

Read more: Made In Chelsea’s James Dunmore takes on gruelling challenge after losing both sisters

Seen encouraging Toff in her future plans, Stanley is left spluttering after she brings up saucy gossip.

“This focus on naughtiness is very odd,” he awkwardly replies as Toff giggles.

One of my favourite people and I are on Made In Chelsea tonight at 9pm on E4! Can you believe it @stanleyjohnson and I on the tele together again! X

Toff, whose return to the reality series comes after bagging a roving reporter role on This Morning and her five week stint Down Under, recently revealed she chats to Stanley about her aspiring political career and relationship dramas.

“Stanley advises me on love and boys and work,” she told Mail Online.

The duo proved a hit with I’m A Celebrity viewers – and cheeky Toff raised a few eyebrows as she hinted the former Conservative MEP could be her type.

She said: “I have always said I do have a thing for older politicians before I came in here… and can confirm that is still standing!”

Stanley, however, seems to regret the happy times around the campfire with I’m A Celeb contestants such as Dennis Wise and Rebekah Vardy.

According to the Daily Star, Stanley fears his affability could go against him.

“Just because I was cheerful and addicted to making jokes doesn’t mean I can’t be considered for serious jobs,” Stanley is reported to have said.

“I wish I could erase the misapprehension about myself always being cheerful.”

He added: “I have spent my entire life fighting for serious issues. People should also know I’ve written 25 books.”

Made in Chelsea is on E4 on Mondays at 9pm.

Will you be watching out for Stanley on Made In Chelsea? Head on over to our Facebook page @EntertainmentDailyFix to have your say.