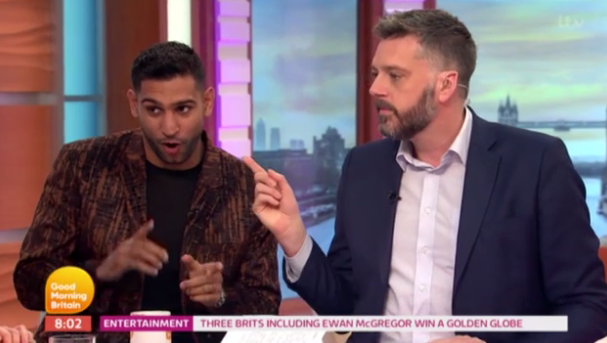 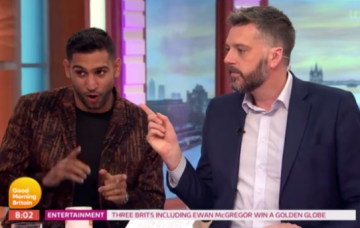 Will they ever let it lie?

Among the most abiding memories of the recent I’m A Celebrity series were the allegations of bullying, with many viewers thinking Iain Lee was given a tough time by his fellow campmates.

Well, the broadcaster, 44, came face to face with one of those accused of hounding him – former boxing champion Amir Khan – on today’s Good Morning Britain.

And in a decidedly toe-curling exchange, Iain had a pop at Amir for lying about him over ‘Strawberry-Gate’, before the two men began to bicker about who was to blame for the incident.

For anyone who didn’t see it, Strawberry-Gate was the moment when Iain and Amir won some strawberries and cream for the camp after playing Cash For Gold, but decided to eat it all themselves.

On return to the camp, Amir then told the rest of the contestants that it had all been Iain’s idea.

And as the two men were reunited on Good Morning Britain, it was obvious that Iain hadn’t forgotten about Amir’s betrayal.

Before the boxer, 31, had even sat down, the talkRADIO presenter let him have it, right in front of Kate Garraway, Piers Morgan and Susanna Reid.

He barked: “Listen, why did you lie about me behind my back? What was that about, dude?”

Smiling awkwardly, Amir spluttered: “You’ve put me on the spot now. I got a little bit scared.”

“So you’re blaming Iain now for this incident?” asked Susanna.

Amir replied sheepishly: “I think we were both to blame.”

But Iain was having none of it, pointing out: “We can see the video where you came up with the idea!”

Read more: Iain Lee reveals truth of how he was treated in I’m A Celebrity jungle

Hilariously, one of the GMB team later presented the two men with a plate of strawberries to share, with Iain commenting: “This is very tense!”

We’re sure it was all pretty amicable really. After all, only last week Amir spoke affectionately about Iain when he made an appearance on Loose Women.

The boxer said: “I like Iain – between me and him, there’s no beef at all and I’d love to see him. Looking back, it’s something to laugh about.

“At the time, I was upset with him because I’d said let’s not tell them [the campmates] straight away. People were expecting strawberries, and if we tell them straightaway they’d be upset – we should have waited until after dinner!”