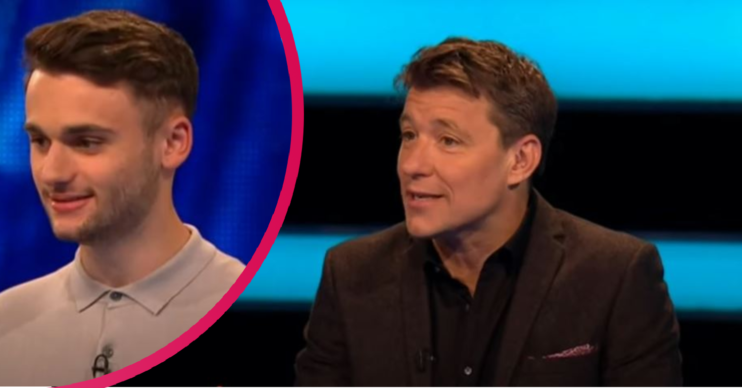 Tipping Point host Ben Shephard had to chastise a contestant on the ITV programme for being “too slow”.

During the first round of Thursday (July 30) afternoon’s episode, hopeful Robin got a question right after falling well behind the other contestants.

But it appeared to make him over confident, as he buzzed in to answer the next question – only to fumble over his response and fail to give an answer.

What did Ben Shephard say on Tipping Point?

It led to an awkward exchange with presenter and Good Morning Britain favourite Ben, who had to scold Robin before moving the game on.

“The Statue of Liberty is located in which American city?” Ben asked, but Robin buzzed in halfway through with, “New York!”

He then went for drop zone three but unfortunately didn’t add to his prize pot.

For the next question, Ben asked: “Which TV cooking duo presented the 2012 programme The Hairy Dieters…”

Before he could finish, Robin pressed his buzzer, then stood looking confused for a moment before asking: “Their names?”

You didn’t say anything.

Robin still didn’t give an answer and was caught by the time out alarm. Ben clarified: “Which TV cooking duo presented the 2012 programme The Hairy Dieters: How to Love Food and Lose Weight. It’s the Hairy Bikers.

“Robin, you didn’t give me an answer. I just needed the Hairy Bikers. Dave and Simon of course, Dave and Si. But you didn’t say anything.

“You got timed out so I’m afraid, we’re going to have to steal that last counter from you, that’s going into the penalty pot.”

On Twitter, the awkward gaffe had fans wondering if Robin had ever seen Tipping Point before – or indeed, any quiz show.

One said: “I guess Robin didn’t have a great day then #tippingpoint.”

Another joked: “Wasn’t really worth Robin turning up was it!?”

Wasn’t really worth Robin turning up was it! #tippingpoint

“Does Robin understand quiz shows?” someone else wondered, adding: “I.e., you need to answer #TippingPoint.”

“Robin has had a nightmare here like haha,” laughed another.

Robin has had a nightmare here like hahaha #TippingPoint