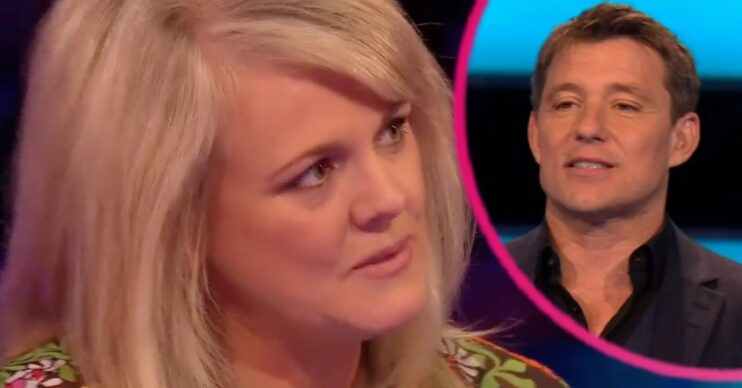 The former Coronation Street actress starred on the celebrity edition of the ITV show during Sunday’s throwback episode (August 8).

Sally was playing for charity and bagged the whopping £20,000 jackpot.

What happened on Tipping Point?

Sally, 48, initially failed to land any counters in the winning drop zone.

However, her luck soon changed during the final round.

Sally’s final counter proved to be the winner and bagged her the £20,000 prize pot.

The delighted actress jumped in the air as she celebrated alongside Ben, 46.

She then went on to explain the money was going to her chosen charity, Christmas Dinners.

Tearing up, Sally said: “I can’t tell you how much this is going to make a difference to my charity.

“It just gives them hope and it’s very close to my heart.”

The charity helps give the most vulnerable in society a joyous Christmas Day.

Ben appeared just as emotional as he said: “That is just phenomenal life-changing money for them.”

While Sunday’s edition was a classic throwback, Ben recently teased new episodes of the ITV gameshow.

Last month, the presenter updated fans as he wrapped up on filming for series 12.

“Can’t wait for you all to see these new eps and all the surprises that await. Very proud as ever to be part of such a fantastic and hardworking team!! #tippingpoint.”

Taking to the comments, one said: “Totally finished or you have finished?”

Another added: “Do you mean there’s going to be no more shows after this one? Or that you’ve just finished this particular series.”

But we’re pretty certain Ben will be back soon enough.