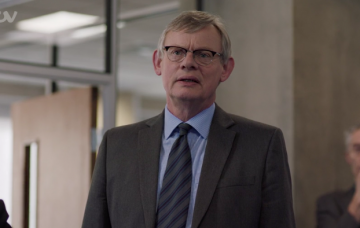 Fans are enjoying the new Martin Clunes drama series, Manhunt. But something far more important and shocking has also come out of the true-crime show.

The police officer who led the investigation in the early noughties has confirmed that three more possible Levi Bellfield victims have come forward after seeing the ITV show.

DCI Colin Sutton – who is played by Martin in the new drama series – led the original investigation and was interviewed by ITV News.

He confirmed he has been contacted by women who all claim to be survivors of Bellfield attacks.

The DCI told presenter Nina Hossain: “I’ve had another three ladies who have come forward to me via Twitter to say, ‘I was attacked by Levi Bellfield and I never reported it to police,’ and I’ve made contact with them and I am going to be less busy tomorrow and I’ve made arrangements to speak to those who want to be spoken to and to try and help them.

“It’s not a complete surprise, to be honest. I’ve been involved in documentaries about Bellfield before and it had the same effect. We just don’t know what the boundaries of this man’s offending were.”

The three-part series, which started on Sunday, stars Martin Clunes as the lead detective. It follows the real-life hunt for Bellfield, who terrorised south-west London between 2002 and 2004.

The search for the murderer began after the body of 22-year-old French student Amélie Delagrange was found on Twickenham common.

The series also looks at the murder of Millie Dowler and Marsha McDonnell – and the brutal attempted murder of Kate Sheedy.

The shocking scenes have drawn a range of reactions from viewers, who were also angry over a “sick” advert that played during Monday evening’s episode.

Have you been watching the series? Leave us a comment on our Facebook page @EntertainmentDailyFix and let us know what you think.