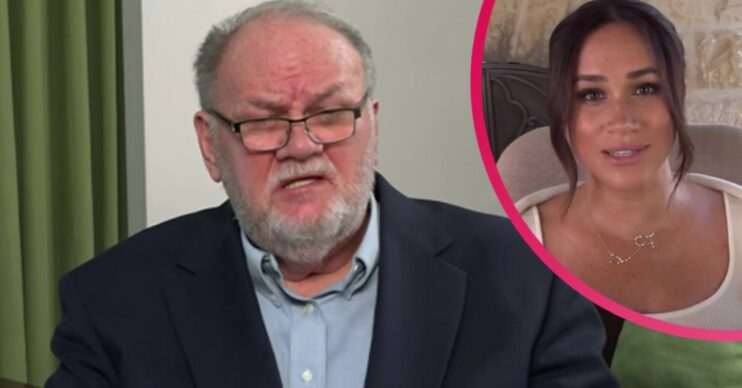 ITV viewers are not happy

GMB viewers were left fuming as Thomas Markle was invited onto the show for his latest chance to bash Meghan Markle.

Meghan’s estranged father has been desperately trying to get in touch with his daughter for years.

However, Meghan has rebuffed his attempts and has seemingly refused to make contact.

This has left Thomas feeling increasingly desperate, and he’s made numerous TV appearances to discuss his feelings.

As a result, his latest comments on GMB on Tuesday (October 19) appeared to be his most shocking yet.

While chatting with Susanna Reid and Richard Madeley, Thomas made his thoughts very clear.

He insisted he will not stop speaking publicly until Meghan finally reaches out.

Thomas said: “I’ve made it quite clear that until I hear from her, till she does speak to me that I’ll continue to do this, and eventually sooner or later she should start talking to me.

“This is way too childish, this is kind of silly, you know it’s time to talk with each other, we’re family. The kids are gonna grow up without knowing that they have two families. This is more than just me and my daughter now.

“This is me, my daughter, her husband, and two babies involved, so it’s time to do something, it’s time to talk.”

Thomas went on to allege that Meghan demanded that he stop talking to her brother and sister, Thomas and Samantha, at one point.

“There are some reasons she got upset with me. One was that she thought I gave too much attention to her brother and sister. She wanted me to stop talking to them, and I couldn’t,” he said.

“I think both of us should grow up, talk, make up, for the sake of the children now and for ourselves. This is ridiculous and has been going on for almost four years. It’s crazy.”

He then shared that he’s desperate to see his grandchildren for the first time.

So much so, that he says friends have advised him to sue Meghan and Prince Harry in a bid to gain access.

Thomas said: “People in California have suggested I sue. I think if I did that I would be a hypocrite. I’d be doing the same thing that Harry and Meghan are doing.”

What did viewers say about the latest Thomas Markle interview?

As a result, viewers rushed to social media to slam GMB bosses for inviting Thomas onto the show.

One angry viewer said: “This interview with Thomas Makle is like an episode of Jeremy Kyle! #GMB.”

This interview with Thomas Markle is like an episode of Jeremy Kyle! #GMB

@GMB still giving Thomas Markle air time?! Whyyyyyy🙄😴 this man craves the attention & airtime & @ITV are stupid enough to give it to him. I’d never publicly slate my daughter over & over, you can see she’s happy, leave her alone! #gmb #thomasmarkle

“#ThomasMarkle being given airtime AGAIN by #GMB,” ranted as a second.

“Why is #gmb giving Thomas Markle a platform,” questioned a fourth.

Meanwhile, a fifth said: “This interview with Thomas Markle is like an episode of Jeremy Kyle!”

What did you think of the latest Thomas Markle interview? Leave us a comment on our Facebook page @EntertainmentDailyFix and let us know what you think of this story.