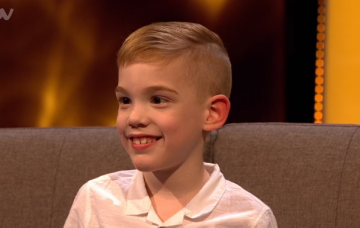 He was diagnosed with cerebral palsy at two-years-old

This Time Next Year viewers were overcome with emotion after seeing a six-year-old boy walk for the first time.

Thomas Hazelton, who was diagnosed with cerebral palsy at two-years-old, first appeared on the show a year ago and said his goal was to be able to recover from his movement disorder and not have to rely on his wheelchair.

After raising enough money to undergo a life-changing operation through fundraising campaigns and doing a talent show, Thomas was able to take his first independent steps on the stage.

Appearing on the show a year ago, Thomas’ mum Kim Black told host Davina McCall that he was born three months premature and was diagnosed with cerebral palsy – an illness which prevents him from walking and leaves him in constant pain – four years ago.

Speaking about the life-saving operation they were raising funds for, Kim explained: “There’s a nerve in Thomas’ spine that they cut through and that will take away the spasticity that causes the pain.

Kim said they had already raised money through some fundraising events and had more lined up.

It was then time for the big reveal, to see if Thomas had managed to undergo the operation.

As the stage doors opened, Thomas walked out on stage alongside his proud mum as the audience clapped and cheered.

Davina asked: “So, Thomas. Can you walk without pain?” to which he replied: “Yes,” as the audience applauded.

When asked how it feels to not be in pain, Thomas said: “It’s great. I’ve still got loads of physio to do. Before my operation, I was having spasms. I was screaming in the night.”

As he stood up, Thomas then told Davina: “I’ve been in that chair long enough. It’s half of my life wasted, mate!”

Another wrote: “Thomas on #ThisTimeNextYear made me cry but with happiness for him. What a strong little man.”

Thomas on #ThisTimeNextYear made me cry but with happiness for him. What a strong little man ❤️

Read more: This Time Next Year viewers are “so proud” of foster carer who lost 8 stone to become a better dad

A third added: “Thomas has had me an emotional wreck. What an inspirational little man.”

Thomas has had me an emotional wreck. What an inspirational little man #ThisTimeNextYear

I’m crying so happy for Thomas

You can donate to Thomas by visiting his JustGiving page