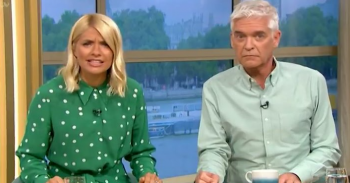 It made Holly nostaligic for the jungle

Chaos kicked off in the This Morning studio today, thanks to some escaped critters.

Hosts Holly Willoughby and Phillip Schofield opened the show by saying they were “mid-trauma” due to some ants that had managed to crawl out of a tank.

The bugs were supposed to be part of a live segment on the show but they ended up crawling around the studio instead.

A serious-looking Phil told viewers: “Welcome to This Morning. You join us mid-trauma today. There’s been an escape in the studio. We’ve got a big bug item coming up later on in the studio.”

Holly, 38, put her recent hosting stint on I’m A Celebrity to good use and insisted she was the one who alerted everyone to the missing creepy crawlies.

She said: “Can I just say. Who alerted everyone to the bug item? Me.”

She added: “I came in to have a look at the tanks, get myself familiar with the bugs that are here. We’ve got cockroaches and beetles.

The cameras then panned to an empty tank and ants could be seen making their way across the fake rocks placed on set!

Phil, 57, sarcastically added that Holly’s time in the jungle has put her in good stead to determine “if a bug is there or not.”

The pair tried not to laugh as Phil reported that three of the seven escaped ants had been found, before Holly added the “breaking news” that a fourth had in fact been located.

Read more: Phillip Schofield unrepentant over Line Of Duty ‘spoilers’ on This Morning

Members of the crew then had to intervene to retrieve the insects, as Holly and Phil tried to get on with the show.

One member of the This Morning team was seen on the ground attempting to scoop the ants up with a script.

Phil even told off This Morning regular Dr Ranj because he walked into the studio heavy-footed. A flustered Phil told him: “There’s guests on the floor!”

Holly seemed to enjoy the jungle nostalgia but we bet she was glad that it wasn’t the cockroaches that escaped!