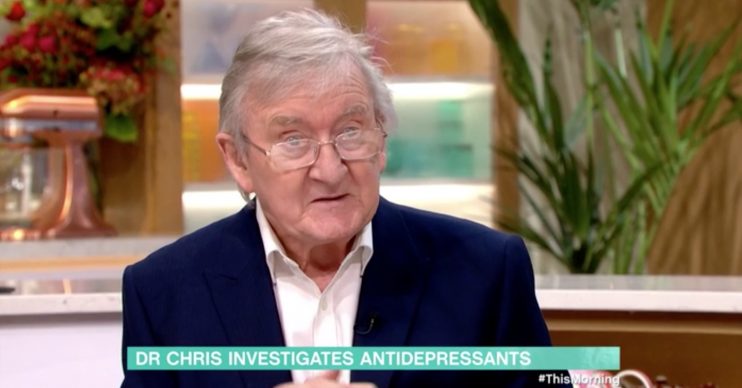 Veteran daytime TV doctor, Chris Steele, has opened up about his battle with depression today.

Dr Chris told This Morning presenters, Holly Willoughby and Phillip Schofield, that he had  “had depression a couple of times, quite bad”.

In a discussion about the effectiveness of anti-depressants, Dr Chris, 77, went on to detail his own experiences with the medication.

“I’ve had depression a couple of times, quite bad,” he admitted.

“One day of depression is an eternity, and then another day and another day,” he continued.

“The awful thing for me was you have sleep disturbance and can’t get off to sleep.

“You have early morning awakening. It’s 4am, it’s dark, you’re left with your mind that has dark thoughts. It’s very difficult.”

He went on to say that he was “living proof” that anti-depressants do work and the sooner a person opens up about their condition, the sooner it can be treated.

Viewers immediately took to Twitter to praise Dr Chris for his honesty.

#ThisMorning Thank You Dr Chris for being honest about Antidepressants. Unfortunately some of us will be on them for life and must stop being ashamed as if we were unclean. Talk to @MindCharity @CharitySANE and the fantastic @samaritans are always on the end of a phone.

Dr Chris on #ThisMorning is such a lovely gentleman. I can’t even deal 🙌🏻

Dr Chris is so lovely bless him #thismorning

One viewer wrote on Twitter: “Dr Chris is such a lovely gentleman.