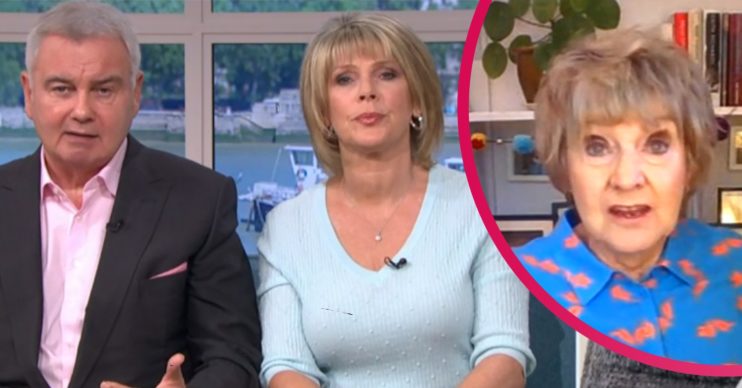 Her blouse wasn't a hit!

This Morning agony aunt Deirdre Sanders hosted a phone-in on Wednesday (July 22) about parents coping over the summer holidays.

But as Deirdre, who last week admitted she broadcasts from her downstairs loo, appeared via video link, her overall look surprised viewers.

What did This Morning viewers say about Deirdre?

Many fans watching at home thought she looked like she’d come out of a tin of Cadbury’s Roses!

One said her eye shadow made her look like a panda.

Deirdre on #thismorning looks like shes had that top from Cadbury roses pic.twitter.com/VGfnxdry3m

Diedre gets dressed in the dark obviously #ThisMorning

Deidre’s eyeshadow reminds me of a panda! #ThisMorning pic.twitter.com/rznFua2ldd

What was Deirdre’s phone-in about?

Read more: This Morning viewers horrified at woman who refuses to work with overweight people

Deirdre was giving exhausted parents advice on how to cope now the school summer holidays have arrived.

For parents, who’ve already endured a long lockdown with their kids at home, the prospect of six more weeks entertaining little ones can be daunting.

She advised Lisa, whose four-year-old is tantruming about the prospect of going to big school in September.

“The initial thing is to nurture yourself a bit, because he’s picking up a lot of his stress through you,” Deirdre said.

Ruth told Lisa she used to ignore her son Jack when he had tantrums because that was the only thing that worked.

Sam also asked about how her kids will adapt to going back after such a long time off already and then another six weeks.

“I know it’s hard, but it really will pay dividends.”