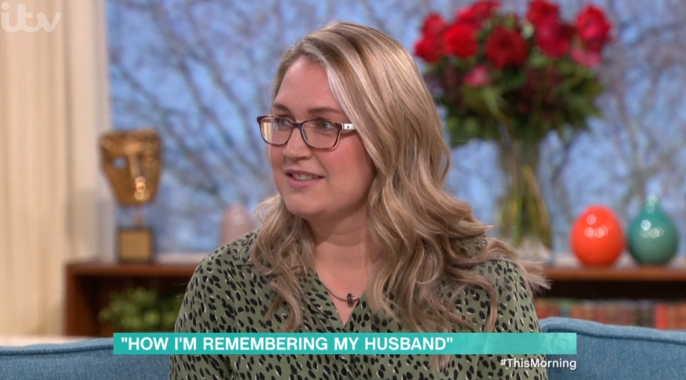 She's honouring his memory by completing his bucket list

Viewers of This Morning were left emotional over a woman whose husband died hours after she gave birth.

Nicola Kinloch appeared on Wednesday’s show to reveal how she’s completing a bucket list her partner Brett created before he passed away.

Nicola explained that Brett passed away from a terminal brain tumour after it was discovered after he collapsed on a football pitch and suffered a weakness in the right side of his body while driving.

Read more: Viewers in hysterics at Holly’s reaction to This Morning discussion on bum wiping and bidets!

Speaking about the MRI scan, Nicola said: “It showed there was a mass on his brain. There was a couple of weeks of testing and at that point, we prepared for the worst and hoped for the best.

“We started to get our head round if it was going to be a bad outcome but just hope that it wouldn’t be.

I take a lot of comfort in the fact that she got to meet him.

“Unfortunately, when we got the bad news, we put some of the plans into place that we’d been thinking about.”

Nicola said the first tumour was removed from Brett’s brain after he received treatment abroad and in the UK.

However, it returned in a “too deep part of his brain” which couldn’t be operated on.

Nicola revealed Brett created a bucket list in his early 20s and on the list was to have a family.

The couple went on to have two daughters but Brett sadly passed away on the day their youngest was born.

Nicola said: “As awful as the situation seems, you write it down, you say it out loud and it’s horrible that she was born on the same day that her dad passed away but it could have been so much worse.

“While I was in labour, he suffered quite a bad seizure and the ambulance crew worked really hard to revive him. He got taken to another hospital to where I’d gone to deliver.

“I wasn’t aware of any of this in my labour.”

Nicola said she’s now continuing Brett’s bucket list to honour his memory including a trip to Australia and a skydive.

Hosts Holly Willoughby and Phillip Schofield then revealed they wanted to help Nicola complete another one of Brett’s bucket list hopes – drive a Ferrari.

They offered her a chance to drive in a red Ferrari later this year at the Ferrari Challenge UK Event.

Viewers were “in bits” watching the segment and shared their thoughts on Twitter.

I’m in bits at this. This lady is so, so brave. #thismorning

What an amazing woman on #thismorning dealing with the loss of her husband. She should be so proud of herself. Make sure you tell everyone around you that you love them. @thismorning