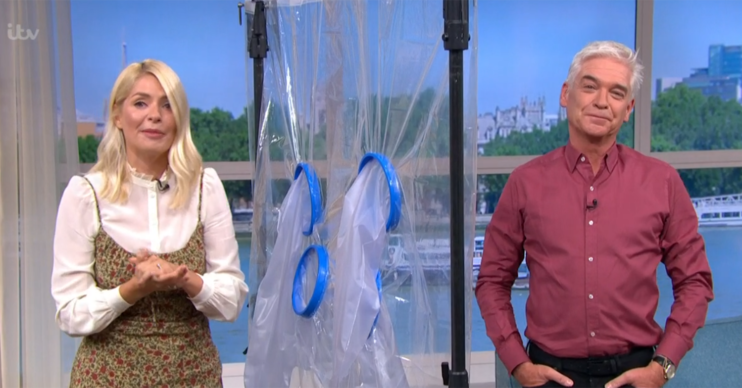 The pair have been off for two months

This Morning viewers were emotional to see Holly Willoughby and Phillip Schofield reunite on the show.

The presenters returned to the show on Tuesday (September 1) after two months off over the summer.

At the start of the programme, Holly and Phil shared their first hug in six months but through a ‘cuddle curtain’ amid the coronavirus pandemic.

Read more: This Morning guest erupts in furious rant as he defends Adele against recent backlash

What did Holly Willoughby and Phillip Schofield say on This Morning?

Opening the show, the duo were wearing face masks which featured their own faces on them.

“They are cleverly designed, it says here, to blend to your face… not so sure about that!”

Speaking about their summer breaks, Phil said: “I did The Cube for the first time in six years.

“It was the best series we’ve ever made.”

Holly added: “[My break was] lovely. Just away with the family. We did just get out of quarantine so I’m like, ‘there’s people around!’ even though I can’t touch you.

“Pretty bad timing but worth it.”

Hosts Ant McPartlin and Dec Donnelly were on the programme and were able to sit next to each other and even hug one another.

What did Ant and Dec say?

Explaining why they didn’t have to socially distance, Ant said: “We’re working on BGT at the moment and other things so we get tested every four days.”

Dec said: “So basically our households are connected and we form a co-hort.”

Ant added: “We’ve got to be careful about where we go and who we see but we’ve got each other.”

Holly turned to Phil and said: “So lucky! We’ve come up with quite a good way to be able to hug each other.”

Wondering why Ant & Dec can sit together on the #ThisMorning sofa?

They've been telling us all about their 'cohort'.

Phil said: “We had a chat with the team and they managed to create this,” as crew members brought in a ‘cuddle curtain’.

A ‘cuddle curtain’ is made of thick plastic which means two people can put their arms through and hug each other without actually having contact.

Read more: This Morning fans divided as Ruth and Eamonn host their final show before Holly and Phil return

Holly admitted: “If you would have done this this time last year I would have thought you were some sort of weirdo.

“However, this year, I’m all over this. Shall we give it a go? How long has it been since we’ve done this?”

The pair then put their arms through and hugged each other.

Viewers were emotional, with one writing on Twitter: “Phil and Holly hugging. We needed that as much as they did.”

Another added: “Why am I feeling quite emotional looking at Phil and Holly hugging with the #CuddleCurtain?”

A third said: “Just watched @Schofe and @hollywills cuddling for the first time and now crying.

“So emotional, loved the cuddle curtain.”

Why am I feeling quite emotional looking at Phil and Holly hugging with the #CuddleCurtain? It has to be hard for people so close to be around but not be able to hug each other. Every family need a cuddle curtain #ThisMorning @thismorning

#ThisMorning Just watched @Schofe and @hollywills cuddling for the first time and now crying 😢 so emotional, loved the cuddle curtain.

Were you glad to have Holly and Phil back? Leave us a comment on our Facebook page @EntertainmentDailyFix and let us know.