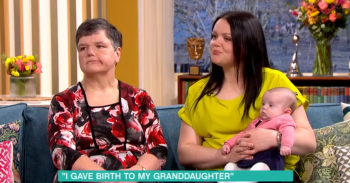 Her daughter was born without a womb

This Morning viewers have praised a grandmother who gave birth to her own granddaughter.

Emma Miles, 55, lost six stone in weight to become her daughter Tracey’s surrogate, after Tracey discovered she couldn’t get pregnant when she was 16.

During Monday’s show, Emma admitted she would be happy to go through the process again if she needed to.

Read more: Eamonn Holmes and Ruth Langsford bicker on This Morning over how to pronounce leprechaun

Tracey revealed she was told by doctors she had been born without a womb.

Speaking about finding out she couldn’t get pregnant, Tracey said: “I was devastated, obviously.”

Tracey revealed her partner Adam suggested they look into surrogacy, but it was too expensive.

Emma then said: “I offered if there was anything I could do and I’ll do it.”

Speaking about her mum offering to be her surrogate, Tracey said: “We had a consultation and [the doctor] suggested using a family member.

Speaking about the risks she faced carrying a baby in her 50s, Emma said: “You do anything for your child, don’t you? [The doctors] explained every risk possible but I said it was something worth taking.

“The morning sickness was normal and then it was plain-sailing.”

Tracey revealed she was able to produce the egg and that was implanted into Emma.

Emma had a c-section and Tracey and Adam were both there to see the moment baby Evie was born.

When Emma admitted she would do it again, Tracey said: “I told her I’m not going to ask her again. She’s done us proud with this one.”

Viewers watching from home were left stunned by the pair’s story.

One person wrote on Twitter: “What an absolutely beautiful thing this lady has done for her daughter! #ThisMorning #imnotcryingyouare.”

What an absolutely beautiful thing this lady has done for her daughter! #ThisMorning #imnotcryingyouare

Another said: “Awwww what a wonderful mother giving her daughter the gift of being a mother such a selfless loving act of kindness #ThisMorning.”

A third added: “How magical. What an amazing story #ThisMorning.”

How magical 🌟
What an amazing story #ThisMorning