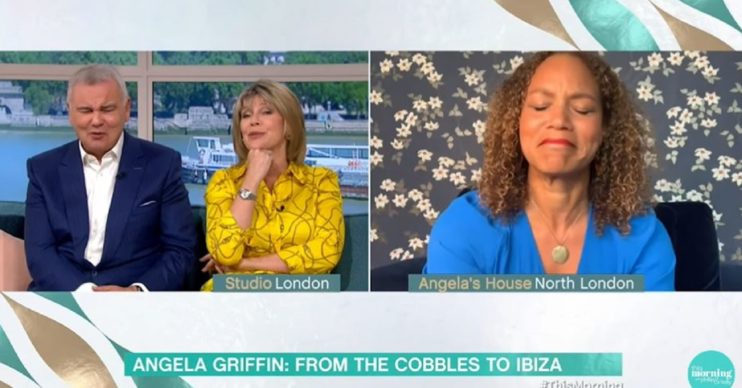 While filming a show

Eamonn Holmes has stunned This Morning viewers by revealing he’s been to a sex party with wife and co-host Ruth Langsford.

On the daytime TV show today (Friday, May 15), the presenter, 60, made the shock confession during a chat with former Coronation Street actress Angela Griffin.

Angela’s starring in a new Netflix drama, White Lines, that features a slew of racy scenes.

Set in Ibiza, it tells the story of a woman who is told her long-missing brother has been found dead. She travels to the party island and discovers he had built a wildly hedonistic life for himself.

Get out of here before anything starts.

Speaking to Angela, Eamonn asked on This Morning: “Have you ever been to one of those sex parties? We went to one [but were] thrown out before anything happened. [We went to] the foreplay, to the preamble.

“We were filming for a series we were doing and my wife said, ‘Get out of here before anything starts. Get out’.”

He went on to say that, as he was leaving, organisers asked him not to reveal who he had seen there. That’s because there was someone at the party who worked in TV and knew Eamonn.

Before he could get himself in trouble, Ruth interrupted and joked: “Maybe it was Angela doing her research.”

Reacting on Twitter, one viewer said: “Eamonn loves telling the sex party story… think he really wants to attend one.”

Another asked, stunned: “Did Ruth and Eamonn really just say they went to a sex party…? #ThisMorning.”

Someone else joked: “I reckon they organised it.”

Did Ruth and Eamonn really just say they went to a sex party…? #ThisMorning

I reckon they organised it and that crystal bowl…hmmn…Abigail pic.twitter.com/EBxb1NR7cK

White Lines is available to watch on Netflix from today.

One of the stars of the show, Daniel Mays, featured on today’s Good Morning Britain and explained exactly why everyone needs to watch it.

The Line Of Duty actor said: “I can’t think of a better show to be released in lockdown because the locations are to die for – it’s a visual treat.”

He added, speaking to hosts Ben Shephard and Ranvir Singh: “There’s comedy, amazing locations, the soundtrack is to die for, it’s dark and it lifts the lid on the seedy underbelly of the island.”