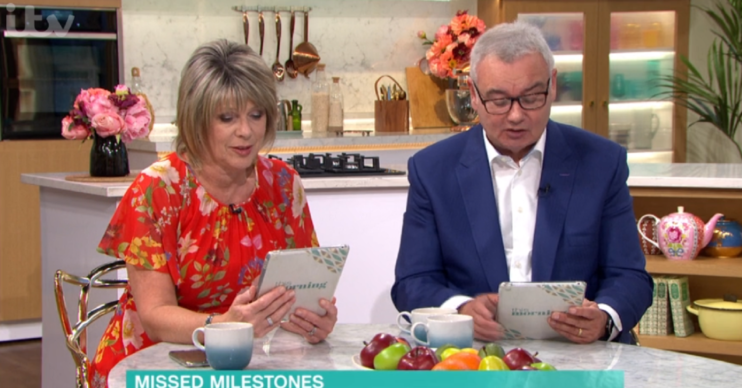 Some thought the caller should speak to grieving families

ITV viewers have blasted a caller on This Morning who phoned in to complain about missing parties because of the lockdown.

During the call-in segment on today’s (Wednesday, May 27) episode, hosts Eamonn Holmes and Ruth Langsford heard from someone called Bernadette who was gutted to have missed out on attending celebrations because of the coronavirus pandemic.

What did the caller say?

She said on the programme: “I’m disappointed, we had six big things happening this year. We had my daughter’s wedding and hen do.

Reacting on Twitter, viewers demanded that the “selfish” caller “get a grip” since the COVID-19 outbreak has killed thousands.

One angry viewer wrote: “Oh get a [bleeping] grip! People have missed final goodbyes and hugs with loved ones, funerals! That’s a tragedy… not missing your [bleepy] party #ThisMorning.”

Another tweeted: “Wow, what a pity party it is today? Crying cos they missed parties? PEOPLE HAVE DIED you selfish bunch of [bleeps]! This is what’s wrong with this country #thismorning.”

A third said: “Disappointment, Bernadette? Go talk it over with the families whose loved ones have died. Fgs…#ThisMorning.”

This is what’s wrong with this country.

Someone else put: “Bernadette… there’s around 36k people who’d gladly swap places with you… #ThisMorning.”

Told to ‘get over it’

A fifth said: “Bernadette, so many people have missed important events this year, build a bridge and get over it #ThisMorning.”

Disappointment Bernadette? Go talk it over with the families whose loved ones have died. Fgs…#ThisMorning

Bernadette…there's around 36,000 people who'd gladly swapped places with you …. #ThisMorning

Bernadette, so many people have missed important events this year, build a bridge and get over it #ThisMorning

However, some understood why Bernadette was upset.

One viewer empathised: “Yes on the grand scale of things a wedding/party can be rearranged whereas a missed funeral or time with loved ones can’t which is so heartbreaking. But that doesn’t mean that everyone else has no right to be upset. Stop invalidating people’s feelings.”