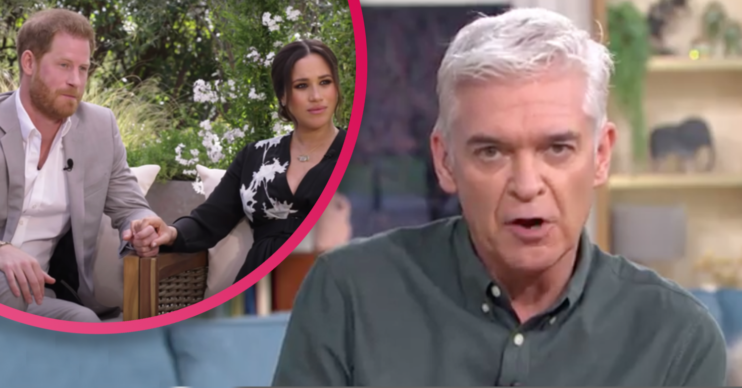 Opinion was divided about the segment on today's show

Prince Harry and Meghan Markle came in for quite the battering from This Morning host Phillip Schofield today (March 18).

It came during a segment in which Phil and co-host Holly Willoughby discussed claims the royal family is yet to speak to Meghan following the Oprah Winfrey interview.

During the segment, Phil even told the couple to “shut up and get on with your quiet American life”.

What happened with Phil on This Morning today?

His comments came during a chat with Gyles Brandreth and Beverley Turner.

The foursome discussed Gayle King’s claims that the royal family haven’t spoken to Meghan since the interview aired.

She said she’d spoken to Meghan and Harry over the weekend.

You’ve made your point, essentially shut up now and get on with your quiet American life.

Gayle revealed: “I think what is still upsetting to them is that the palace keeps saying they want to work it out privately, but yet the false stories are coming out that are disparaging against Meghan still.

“No one in the royal family has talked to Meghan yet at this particular time.

“They both want to move forward with this and they both want healing in this family. At the end of the day, that’s Harry’s family.”

And, while Beverley was unhappy that Meghan had apparently spoken to the CBS News anchor, Phil took things a step further.

What did Phil say about Meghan and Harry?

This Morning host Phil said: “There’s been an enormous amount of sympathy over the race issue and the mental health issue… but looking at the polls that sympathy seems to be ebbing away.”

He added: “Isn’t there this feeling Gyles, that you’ve made your point, essentially shut up now and get on with your quiet American life.

“You’ve stabbed a knife through the heart of the monarchy… but stop now.”

What did viewers say about the outburst?

Some accused Phil of being “dramatic”, but others agreed with his sentiment.

“Stabbed a knife at the heart of the monarchy?! A bit dramatic Phil,” said one.

Another claimed: “Honestly what is wrong with @Schofe telling Harry & Meghan to shut up…while the royal family are still leaking info to the papers about Harry & Meghan.

“Why don’t you tell the royal family to shut up. You are part of the problem,” they added.

Another slammed: “How dare @Schofe telling Prince Harry & Duchess Meghan to shut up & live their American life when this story was put out there first by the palace!

“Because of your hate for this woman, you don’t seem to see logic any more, it’s disgraceful!”

However, others agreed with Phil and said enough is enough.

“I like Harry & Meghan, but they shouldn’t be letting ‘friends’ speak for them. Sick of hearing it now,” another viewer revealed.

“Yes Phil spot on about Meghan,” said another.

Head to our Facebook page @EntertainmentDailyFix and tell us what you though of the comments.