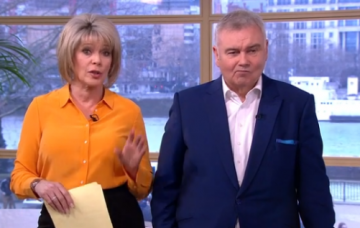 Star was in agony due to bum implants

They usually interview their guests from the comfort of the This Morning sofas but Eamonn Holmes and Ruth Langsford were unable to do so today because it would have been “extremely painful” for their interviewee.

Star Delgiudice told the presenters she would have to speak to them standing up as cosmetic surgery she’s had to enhance her bottom has left her in agony.

She said it hurt to lie down, drive and sit on anything but a huge fluffy cushion as result of her implants, which she spent £15,000 on in the hope of looking like her idol Kim Kardashian.

Now she fears the implants could even explode.

Telling Eamonn and Ruth about her surgery, the 28-year-old from Birmingham said: “I gained three stone and they transferred the fat onto my hips and my bum. I wanted implants as well but I didn’t realise they would be that big.”

Star’s bottom has doubled in size as a result of the seven hour op, which she now regrets.

She went abroad to have the surgery done and now wishes she’d hadn’t been so “naive” and had done more research before going under the knife.

Star said of her enhanced derriere: “It’s very pointy. It looks good through clothes but when I have a bikini on it looks crazy.”

Star had the surgery in December and has been told to leave it “at least six months” to let the implants “settle in”.

However, she has been warned this could also take up to two years, and she’ll have to endure how painful they are in the meantime.

Some This Morning viewers had little sympathy with her predicament.

One said: “I’m scared my bum implants will explode” dear oh dear should of thought about that before having something ridiculous like bum implants love! #ThisMorning.”

Another said: “The moral here… be happy with who you are. #ThisMorning.”

A third wrote: “Finding it hard to feel sorry for this woman really. Surely everyone knows research is key #ThisMorning.”

Star admitted she had become addicted to cosmetic surgery as she’s also had a breast enlargement, lip fillers, cheek implants and a nose job among other treatments.

She said she’s “never been happy with the way I looked” and, as she was raised in a family of Jehovah’s Witnesses, she felt she missed out on being a normal teenager.

She said she now “misses” the “skinny bum” she had before her op.

She’s reluctant to have further surgery but she might need to have corrective ops in the future.

Star said she paid for all her treatments herself and wouldn’t rely on the NHS to fix her bottom.

Eamonn suggested she might be better sorting out her “mindset” first, and Star said she was seeing a therapist because she has post traumatic stress from the surgery.

Many viewers wished her well and hoped she could get the help she needs.

One tweeted: “Star has such a lovely, caring personality. I can see what she is underneath the augmentation & hope she realises one day just how beautiful she is and doesn’t go through any more surgery. #ThisMorning.”

Another said: “Bless this lady, she was beautiful before. Hope she recovers ok.”

A third wrote: “Sad that she feels so bad about herself to have all this plastic surgery. I understand if it makes her happy but it obviously hasn’t #ThisMorning.”

What did you think about Star’s interview? Le ave us a comment on our Facebook page @EntertainmentDailyFix and let us know what you think!