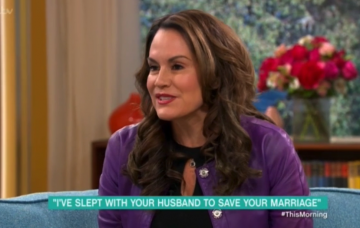 She's slept with over 100 married men

This Morning viewers were left gobsmacked by a woman who claimed she has slept with over 100 married men.

Holly Willoughby and Phillip Schofield met Gweneth Lee, 47, who insists she has saved marriages by being a mistress.

Gweneth told the hosts that she thinks monogamy is overrated and having an affair is nothing but a physical action.

Introducing Gweneth to the show, Phil asked her: “Is this a job or a high sex drive?”

She replied: “It’s not like sheets are flying, it’s not an occupation. I have my own businesses.”

Gweneth revealed that she had been happily married before her husband died of cancer 12 years ago.

“We had an open marriage from the beginning,” she said. “We had one of those ‘don’t ask, don’t tell’ marriages.”

She said her late husband had an affair during their relationship.

Gweneth said she believes having an affair is “nothing more than sex,” but “people should keep their wits about them” if they’re going to have one.

She uses an adultery website to find married men to date and have an affair with.

Gweneth insisted that she isn’t “out there stealing my girlfriends’ husbands” but prefers to date married men because they are more polite.

“I can’t be accountable for destroying marriages,” she told Holly and Phil.

“I understand people who aren’t familiar can judge it that way but this is someone who has gone on the website because maybe they haven’t had sex with their spouse for five or ten years.”

She added that some of the men have “an arrangement” with their spouse, meaning they both are aware he’s having an affair with Gweneth.

“But what about if they have children?” Holly asked. “It could potentially destroy a family… it can’t feel right?”

Gweneth replied: “I understand what you are saying, but someone who makes an effort to go on a dating website is going on there with the purpose of having an affair. It’s their choice.

“Anyone who gets involved with me is logically thinking. We go for lunch, have a talk and if we want to start an affair, we say, ‘listen, this is how it’s going to be’. Their wife and their kids is their business. My family is my business.”

Gweneth insisted what she does can save marriages.

She said: “More than one man has said that having an affair with me has made home life so much more relaxed, taken the pressure off their marriage. Maybe after 20, 30 years of marriage, they aren’t intimate anymore. ”

After listening to Gweneth’s interview, some viewers weren’t impressed.

But others were quick to suggest the husbands needed to be called out, too.