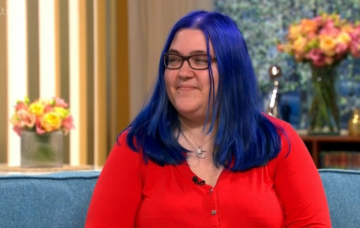 She believes polyamory is "the key to a happy relationship"

This Morning interviewed a woman who is in a relationship with four different men on Wednesday’s episode of the show.

Mary Crumpton, from Chorlton, is in a polymorous relationship with her husband Tim, her fiancé John and two boyfriends James and Michael.

She told hosts Holly Willoughby and Phillip Schofield that she believes polyamory is “the key to a happy relationship.”

When asked why she chose this lifestyle, Mary replied: “I found that I was somebody who naturally fell in love with more than one person at a time.”

“I think a lot of people have that experience and either they’ll cheat or they’ll pretend they don’t,” she continued.

Mary admitted she never knew what polyamory was until she met a woman who had more than one partner.

She insisted that being polyamorous is not “all about sex.”

“For me, love is not a limited resource,” she told Holly and Phil. “A parent has one child and then they have a second, it doesn’t mean they love the first any less.”

Mary revealed that she lives with her husband Tim and fiancé John under the same roof in separate rooms, while James and Michael “live down the road.”

“How does that arrangement work?” Phil asked Mary.

Mary revealed she and John plan to have a “commitment ceremony,” as it’s illegal to marry more than one person in the UK.

When asked if she ever gets intimate with her four partners at the same time, Mary insisted she does not.

“Some people are into that but I’m quite traditional,” she said. “The relationships that I have are very normal, it just happens that I have more than one.”

Curious to know more, Phil and Holly asked Mary who she decides to sleep with on special occasions, like her birthday and Christmas.

“We have a conversation,” Mary explained. “I try to divide my time in a way that I’m giving love and respect equally.”

“But aren’t you just exhausted?” Holly asked. “When do you just get a chill out night to yourself?”

“No!” Mary quipped. “Thursday nights! I do make sure I have time on my own.”

Mary admitted she wouldn’t rule out having a fifth partner.

“I’m very happy with how I am at the moment but if Prince Charming walks in tomorrow, who knows?” she said.

Mary told the hosts that she would be happy if her partners have other relationships.

“I’m not a jealous person,” she said. “I would be happy for them to have more than one person.”

She concluded the interview by saying she believes marrying more than one person should be legal in the UK.

Some simply said each to their own, and they wouldn’t judge Mary’s life choice, while others just couldn’t wrap their head around the idea.