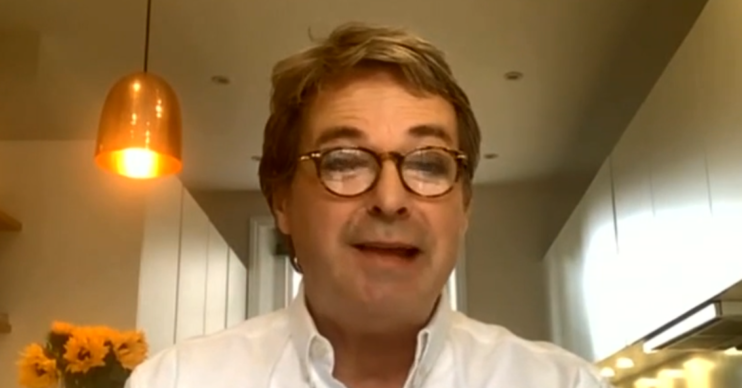 It was an interview packed full of innuendo

Julian Clary made a rather cheeky remark to Holly Willoughby on This Morning today, leaving fans – and the hosts – giggling.

The writer and performer was on the show to discuss the paperback release of his latest children’s book The Bolds Go Wild.

But talk soon turned to his usual stint in pantomime at Christmas.

Holly asked him: “It’s part of our family tradition to come and see you in panto at the Palladium every year. That’s not as yet, we don’t really know what’s happening with that, can you shed any light on it?”

Read more: Josie Gibson splits her jumpsuit on This Morning

Julian replied: “We are hanging on by our fingernails waiting for some directive from the government.

“If they don’t let us know that theatres are going to be open at the planning stage, we’ll miss that boat, so not only the Palladium panto, but the pantos all around the country will have to be cancelled.

“So we are waiting for the sign because it’s not Christmas without Dick is it, Holly?”

Holly couldn’t help but start giggling and co-host Phillip Schofield also struggled to maintain his composure at the rude remark.

“It really isn’t. Quite right, Julian,” Holly managed to stutter out.

Those watching at home had been in hysterics too as they picked up on the naughty remark.

“It’s not Christmas without dick…” 🤣👏🏻 daytime TV is great!#ThisMorning @thismorning

It’s not christmas without dick is it Holly? #ThisMorning #Screaming

The rest of the interview hadn’t been innuendo free either. Julian began by revealing: “I’m slightly distracted, I’m, in my kitchen and there’s a man up a ladder outside my window, so if my eye wanders it’s because I’m looking at some grubby dungarees.”

He later referred to the workman again when Phil asked him about life in lockdown.

“I have, like everyone else, cleaned everything and emptied cupboards, and that’s why that man’s on a ladder as we speak painting the outside of the house – it’s not just for my personal amusement!”

When they did actually talk about Julian’s books, it turned out Holly’s daughter, Belle, is a big fan and had wanted her to ask some questions on her behalf.

“She asked why did you choose hyenas? She’s interviewing you now!” Holly joked.

“Because hyenas laugh at the time and I wanted the family to be funny and they’re kind of based in my family in Teddington,not that we were hairy or anything like that, but we did spend out lives being silly as I recall when I grew up.”