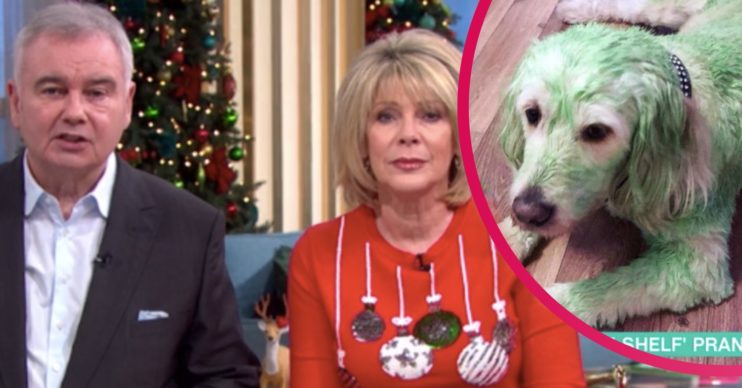 Did this mum go a step too far?

This Morning featured a dog dyed green in an elaborate Christmas prank and viewers weren’t happy.

Mum-of-three Claire, from Manchester, loves doing Elf on the Shelf pranks so much that she has sprayed her car, walls and even her dog.

While giggling away, Ruth seemed to find it quite funny that the dog was dyed bright green.

“Look at the dog!” she laughed before saying to hubby Eamonn Holmes: “Imagine if that happened to your car!

Ruth and Eamonn laughed at the pranks

“I can’t imagine you being very happy about that!”

To which a bemused Eamonn replied: “I would not be very happy.”

Read more: Linda Nolan tells her sisters that her cancer has spread on their reality show

Claire had sprayed messages from the elves all over her Range Rover.

But viewers took to Twitter to share their disapproval of the pranks and concern for her dog.

For example, one viewer raged: “#ThisMorning What an idiot! And to do that to your poor dog is disgusting! Some people shouldn’t be allowed to own a pet. What a terrible example to set her kids. Anything for attention. Pathetic!”

Viewers felt sorry for the dog

While another viewer fumed: “What the [bleep] has she done to her dog!! #ThisMorning.”

Following a third user who mocked: “Encouraging the kids to spray paint the walls and dog. Very smart! #ThisMorning.”

Read more: Viewers in tears as Ollie and Gareth get married on Made in Chelsea

Whereas a fourth user complained: “That’s not healthy for the dog to be dyed green for Elf on the Shelf!”

Meanwhile, This Morning guests India Willoughby and Andrew Neil claimed to have no idea what Elf on the Shelf is.

India said: “You know what? I’ve actually never heard of Elf on the Shelf.

“Is this one of those Americanisms? It’s almost like Halloween has mutated…”

And Andrew claimed he didn’t know it either.

In fact, one viewer responded by tweeting: “What!!! @IndiaWilloughby has never heard of Elf on the Shelf #ThisMorning.”

But another viewer argued: “#ThisMorning so pleased that India and Andrew have never heard of elf on a shelf, another trashy American thing we’ve taken on.”