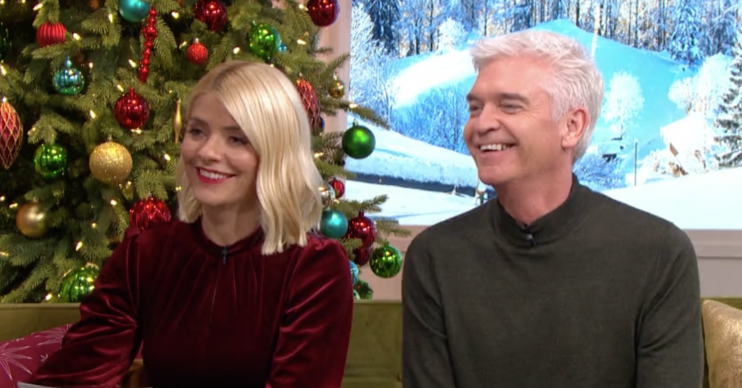 This Morning viewers have mocked the idea that Christmas is cancelled.

Holly Willoughby and Phillip Schofield spoke with guests about the new ‘six-person rule’.

As of Monday, September 14, only groups of up to six can gather at a time.

Bar a few exceptions, groups of more than six can no longer meet in one home.

Holly says the new rule could prove ‘awkward’ for her family

This could split families up during Christmas celebrations this year.

Holly said she’s worried she will have to choose between spending Christmas day with her mum or dad.

Read more: Phillip and Holly struggle to contain giggles as they talk vaginas

She asked Matthew Wright: “This is awkward for me. I’m in a family of five. Am I going to have to choose between my mum and dad on Christmas?”

Matthew replied: “I’m feeling very confused and conflicted. The rules are different everywhere else in the United Kingdom.

But many viewers seem unbothered by the rule

“You can’t have your parents over on Christmas Day but you can go on public transport? For the life of me, I can’t make any sense of it.”

Holly added: “I guess the other thought is how is anyone going to police these rules? The government are going to have marshals to monitor people.”

Many seemed to not only welcome the new rule, but see the positive side to it.

One viewer tweeted: “I enjoyed that #ThisMorning view. I know everyone will feel differently, for good reason, but it will be a good excuse this Christmas for me not to run around visiting everyone and going to them, I might get to watch the Christmas telly.”

Another viewer joked: “#thismorning Christmas without the parents and in-laws sounds perfect.”

A third user argued: “#thismorning if I have to stay at home alone at Christmas to keep my mum safe and healthy due to her own serious issues than i will do it. Its 1 day! I’m not saying I won’t be upset but…. her life is more important to me than a load of tinsel.”

And a fourth user complained: “If I hear cancelling Christmas on this morning again am gonna throw a wet fish at schofe #Thismorning.”