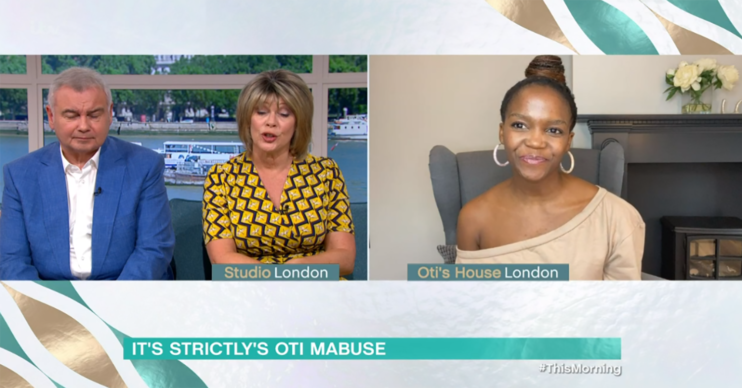 Oti laughed off the blunder!

Oti Mabuse was left in giggles when Eamonn Holmes mispronounced her name on This Morning.

The Strictly Come Dancing professional appeared on Friday’s show to discuss what she’s been up to during lockdown.

However, as Eamonn and Ruth Langsford introduced her, he apologised after saying her name incorrectly.

He said: “Very shortly, she’s been keeping us dancing in lockdown but will she be able to defend her winning title this year?

“There she is, she’s my favourite and she knows it,” as Oti waved on video call from her home in London.

There she is, she’s my favourite and she knows it.

Eamonn replied: “Sorry, I was thinking about his sister.”

One person said: “Eamonn’s favourite from Strictly, but he doesn’t even know her name.”

Another wrote: “Get her name right.”

Eamonn's favourite from strictly, but he doesn't even know her name 🤦‍♀️ #ThisMorning

Get her name right? #ThisMorning

Meanwhile, Eamonn recently admitted he fears he has four years left to live after his dad died aged 64.

Eamonn later revealed he still has dreams he’d like to pursue, despite his longstanding TV career.