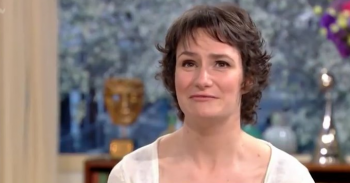 Fans of This Morning were aghast today when a mum revealed she feeds her family dead animals she finds on the side of the road.

Laura Ansbro doesn’t like to waste food and has become resourceful in the way she eats.

She has a blog called the Millennial Hunter Gatherer and often dishes up dead animals she finds on her walkabouts.

Laura explained that she left her job in marketing to bring up her son three years ago, which meant she and her husband had to readjust their finances and save money where they could.

She revealed they then began to pick up animals that they would find on their travels. She added that her husband was a gamekeeper and knows what is safe to eat.

Laura told This Morning hosts Holly Willoughby and Phillip Schofield: “Over the summer you see animals on the road.”

She added of her husband’s expertise: “He knows whether it’s fresh.”

But viewers of the show were left feeling rather queasy from the interview and some questioned the money-saving method.

One wrote: “Only roadkill I’ve ever seen is squirrels, headgehogs, foxes, seagulls and the odd pigeon.. don’t fancy any of that for dinner 🤷‍♀️🤷‍♀️ #ThisMorning.”

Another questioned: “#ThisMorning do her kids have roadkill sandwiches for lunch? 😳😝.”

Only roadkill I’ve ever seen is squirrels, headgehogs, foxes, seagulls and the odd pigeon.. don’t fancy of that for dinner 🤷‍♀️🤷‍♀️ #ThisMorning

#ThisMorning do her kids have roadkill sandwiches for lunch 😳😝

Another thought it was the stuff of nightmares, adding: “I swear I’ve seen people eat roadkill in horror movies #thismorning.”

Laura revealed she even serves up her ‘roadkill’ finds to dinner guests.

She also fed her three-year-old son a pigeon that had been electrocuted. However, she made it clear they do not eat anything that is squashed or maimed.

The frugal cook added that she will also use fruit and veg that is out of date if it looks and feels alright, so as not to waste anything.