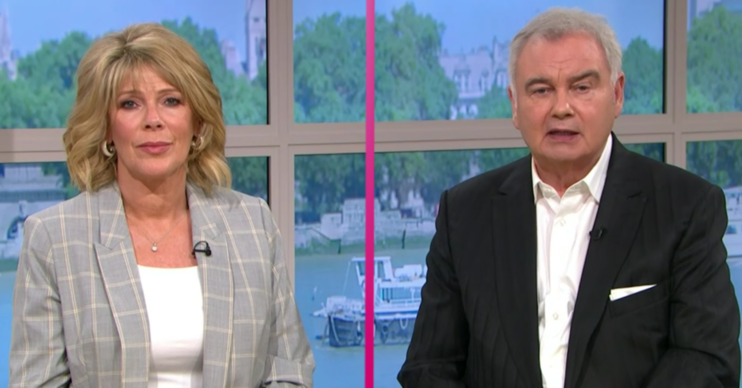 They've been covering for Phil and Holly over the summer

This Morning viewers issued a plea to Eamonn Holmes and Ruth Langsford as they presented their penultimate summer show on ITV today (August 26).

Eamonn and Ruth have been covering for hosts Phillip Schofield and Holly Willoughby over the past six weeks.

The regular hosts have been enjoying a well-earned break and today Ruth revealed her time with Eamonn on This Morning was sadly coming to an end.

When will Ruth and Eamonn step back from This Morning?

Ruth revealed at the top of the show today that there are only two summer This Morning episodes left.

This appears to mean that, after tomorrow’s show, the much-loved married couple will no longer be regular fixtures on our screens.

They’ve gone down an absolute storm with viewers over the summer, with their bickering and banter seeing the pair hailed as #couplegoals.

As a result, it appears some This Morning viewers would like the twosome to stick around.

Are ITV viewers upset about Eamonn and Ruth leaving This Morning?

Oh yes, it appears some of them are judging by the emojis that have been posted.

One viewer appeared so distraught at their imminent departure the issued a plea to the couple written entirely in capital letter.

Read more: Eamonn Holmes responds to fan who urges he and Ruth to host GMB

They also added the crying emoji.

Another shared a gif of a baby crying and said: “Last two days of Ruth and Eamonn.”

Meanwhile, another commented: “I’m so going to miss these two. Their banter (and professionalism) is brilliant .”

What have Holly and Phil been up to on their break from This Morning?

Holly’s been on TV alongside Bradley Walsh in their new show Take Off.

She’s also been promoting her upcoming book on telly and on her social pages.

Phil, meanwhile, appears to have also spent the summer relaxing.

Yesterday he posted a picture of his “battered” Kindle and all the books he’s been reading.

Will you miss Eamonn Holmes and Ruth Langsford on This Morning? Tell us on our Facebook page @EntertainmentDailyFix.