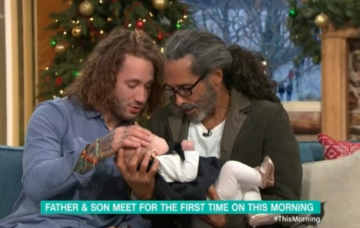 Ollie Aris had been searching for his dad for years

This Morning fans were left reaching for the tissues after a man met his son and baby granddaughter for the first time.

During Friday’s show, Ollie Aris revealed he never knew his father and was raised by his mum but discovered his biological dad on Facebook seven years ago.

Ollie, 28, has reached out to his dad Les and invited him to spend Christmas with the family.

Read more: This Morning viewers emotional as soldiers reunite with their children

Speaking to hosts Eamonn Holmes and Ruth Langsford, Ollie said: “I didn’t know what to think of him because I never really knew him I suppose.

“I used to look at people with their mum and dad and I used to think, ‘I really want that’. It was hard.”

Ollie said his mum “was always looking” for Les and they finally found him on the social media site when Ollie was 21.

Speaking about his dad’s reaction when he got in touch, Ollie said: “He was happy. It was all a bit rushed and it kind of fizzled out.”

Eamonn then told Ollie his dad was waiting to meet him backstage before introducing Les to the show.

Les then walked out and rushed to hug his son.

The pair shared an embrace as Eamonn and Ruth watched on.

Here’s the moment Ollie and his dad Les meet each other for the first time ❤️ https://t.co/8M9C2B1t4G pic.twitter.com/rArZ36BDEs

Speaking about why things fizzled out between himself and Ollie, Les said: “At the time, I was taking care of my mother, who has dementia, and I had to end up putting her in a home because [I had] an accident that was severe then I ended up spiraling into depression.

“Also, I have a mentally challenged sister who I am the guardian of. So it became very difficult trying to spiral out of my near-death and my severe depression.

“As I came out of my depression, I realised I needed to reach out to [Ollie].”

Speaking about meeting his dad for the first time, Ollie said: “It’s crazy. I didn’t think it was going to happen.”

Ruth then told Les that he’s a grandfather as Ollie’s 14-week-old daughter Blake was carried out.

Viewers watching from home were left in tears over Ollie and Les’ story.

One person said: “In tears!!! So good of this morning to do that for the family.”

Another wrote: “#ThisMorning has me in tears,” while a third added: “Best wishes to Ollie & his dad. Such an emotional watch.”

In tears!!! So good of this morning to do that for the family. #tistheseason #ThisMorning

#ThisMorning has me in tears 😓

Best wishes to Ollie & his dad. Such an emotional watch

Oh wow! That’s so emotional. Merry Christmas to them and This morning. Thank you for sharing. ❤

What a moving story..this is what Christmas is all about. Best gift x

What did you think of Ollie and Les’ meeting? Leave us a comment on our Facebook page @EntertainmentDailyFix and let us know what you think!