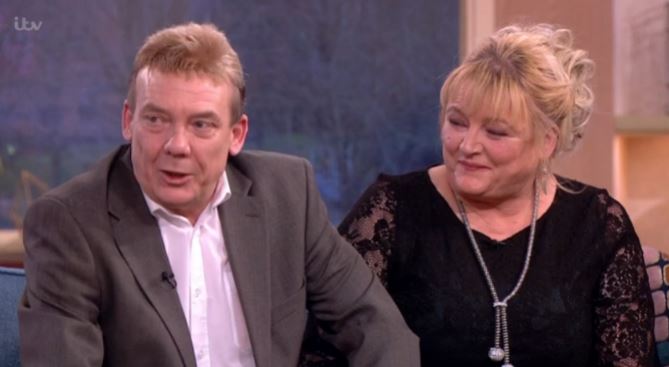 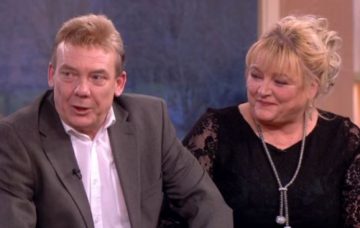 What an emotional TV moment

This Morning viewers were left sobbing today when a brave man finally got to make his wedding speech – after a stammer prevented him speaking out on the big day.

Tony Robinson, 54, wanted to tell wife Paula how much she meant to him on their wedding day, but felt too nervous to speak publicly in front of a room full of people, some of whom didn’t know about his stammering.

But on Tuesday’s episode of This Morning, the lorry driver finally found the courage to deliver his self-penned, touching speech to Paula.

In an emotional moment that left viewers in tears, Tony got to his feet and told Paula: “I’m sorry I couldn’t do the speech at our wedding. As you know I was scared and nervous.

“I am so proud to be your husband. You are the most caring and patient person I have ever met. I feel so comfortable when I am around you.

“Thank you for being Mrs Robinson.”

Paula was seen dabbing away tears as she gazed proudly at Tony, while Holly Willoughby was visibly moved and could be seen reaching over to hold Tony’s hand afterwards.

Holly told him he did brilliantly.

Tony had earlier explained how he and Paula met online four years ago.

Their initial conversation was all via text before Tony decided it was time to tell her about his stammer.

“I put in a message to her that I’ve got something to say that might put you off me,” recalled Tony.

They married in 2016 and Tony wrote a speech to deliver at the reception.

But when the moment came, he found he wasn’t able to give the speech.

Tony explained: “I wanted to get up and say the speech but there were quite a few people in the room I didn’t know so maybe I was a bit conscious about speaking in front of people who didn’t know I had a stammer.

“I prefer people to know I have the stammer before I talk to them.”

Tony’s stammer started when he was six years old.

He told Holly and Phil he thinks the stammer was triggered by his parents’ split, saying: “Hearing the arguments and the shouting, I think it upset me and gave me anxiety problems.”

Tony said he struggled during school, as even though he knew the answers to questions, he was too scared to put his hand up as he knew he’d stammer and be laughed at by other pupils.

The stammer also influenced his choice of career – long-distance lorry driver – as he knew contact with others and the need to converse would be minimal.

He said things other people take for granted such as making phone calls or ordering takeaway can be immensely difficult for him.

But Tony’s life totally changed when he met Paula online in 2014.

Read more: Holly and Phil are taking on Ant & Dec in TV battle

Tony joined Holly and Phil on the sofa to discuss taking part in ITV documentary, School For Stammerers, which explores the impact of stammers.

His interview was widely praised by This Morning fans, many of whom said the beautiful wedding speech had left them in tears. 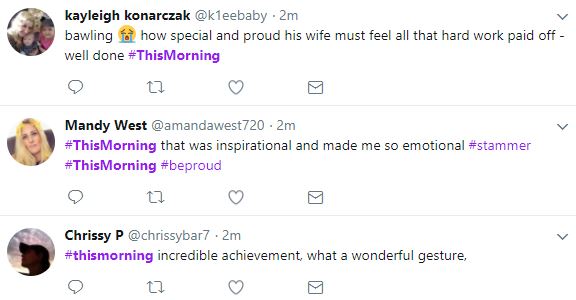 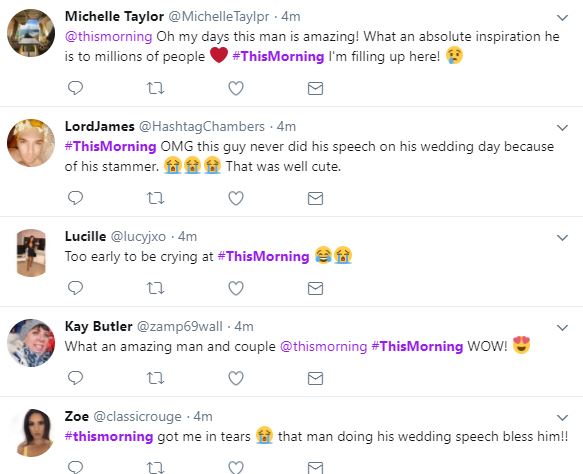 It airs tonight at 9pm on ITV.