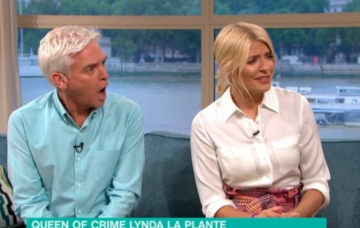 This Morning viewers in stitches as guest plays DEAD

This Morning viewers were in fits of laughter as crime writer Lynda La Plante appeared on Thursday’s show.

The 75-year-old also amused hosts Holly Willoughby and Phillip Schofield as she did her book characters’ voices and blew raspberries before pretending to be a dead body!

Lynda was on the daytime show to talk about her new thriller Murder Mile, the fourth novel to follow the life of Prime Suspect’s Detective Chief Inspector Jane Tennison.

While discussing her books, Lynda spoke about the characters in their own funny voices which led Phil to ask her: “Do you write the books in these voices too?”

Lynda laughed, replying: “Yes I do!”

She then moved on to talk about a previous research trip to a Russian morgue.

She said: “That was horrendous. In the Russian morgue it was worse than anything because I was standing and didn’t see the chute that the bodies were coming down and onto a plastic mat.”

Lynda then collapsed onto the sofa as she recalled the moment her interpreter fainted inside the morgue because he could see the bodies “thumping” down the chute.

Lynda went on to mimic her Russian guide and blowing raspberries leaving Holly and Phil in hysterics.

Talking about the dead bodies, Lynda placed her arms above her head and said: “They were strung up like this on shelves.”

Another said: “Lynda La Plant’s a bit mad isn’t she,” followed by a string of laughing face emojis.

“What a fantastic interview!!!” a third tweeted. “That Russian morgue story, brilliant!”

Meanwhile in the interview, Lynda also expressed her love for cricketer Freddie Flintoff, who she described as “lovable” and “handsome”.

She said Freddie, who has recently delved into acting, has a “charm” to him that is very similar to that of her character Detective Spencer Gibbs.

Lynda also recalled a moment she met the Queen at Buckingham Palace.

She explained: “I was quite unsure why I was there because nobody said what it was about. It was the Royal Academy and [there was] a lot of actors.

“It was extraordinary to meet the Queen, I mean wonderful.”

Have you ever read one of Lynda’s novels? Leave us a comment on our Facebook page @EntertainmentDailyFix and let us know what you think!